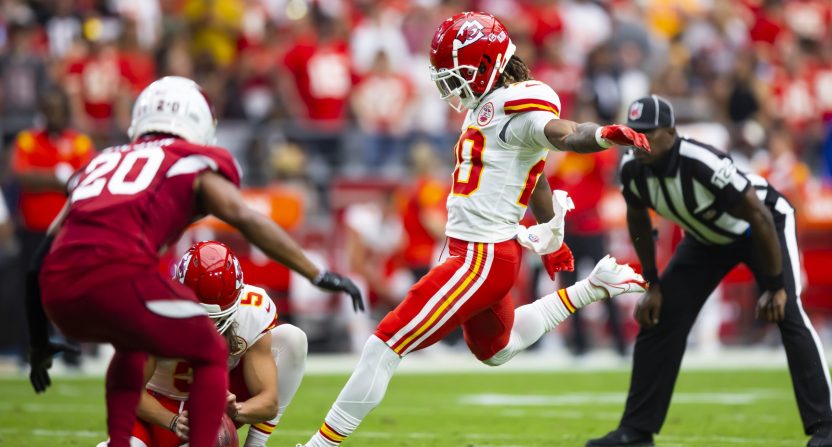 The Kansas City Chiefs will be without kicker Harrison Butker once again this week, according to ESPN NFL insider Adam Schefter.

Chiefs ruled out kicker Harrison Butker for Sunday’s game vs. the Colts; Matt Amendola will kick again for KC.

Butker is still recovering from a left ankle injury suffered against the Arizona Cardinals, which head coach Andy Reid blamed on the turf. At the time, since the team didn’t have any other kickers on the roster, safety Justin Reid stepped in and not only boomed a kickoff out of the endzone but also converted an extra point.

Reid, however, isn’t the long-term solution for the Chiefs, who have needed to replace Butker’s booming leg for a few weeks now. They’ll put their faith in Matt Amendola while Butker heals. Amendola went two-for-two on field goal attempts while also going 3-for-3 on extra points in the Chiefs’ 27-24 win over the Los Angeles Chargers last weekend.

Clearly, KC has all the faith in the world in his as well while they wait for their starter to heal up.

Fans, however, love a fun story, and Reid getting the chance to kick some more certainly has many of them wanting to see it happen. The reactions to the news about Butker got the NFL world talking about him, Reid, Amendola, and anyone else who might be available to kick for the Chiefs.

When Mahomes warned fantasy managers that it’d be someone different every week, he wasn’t kidding. The Chiefs have even had three different guys kick extra points already! https://t.co/5M5Uu8zZcx