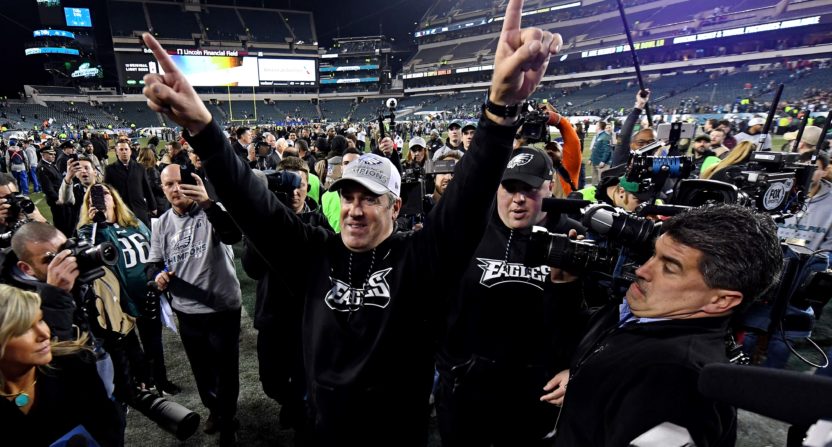 One of the biggest cold takes of the last 12 months falls to veteran NFL writer Mike Lombardi. In a video for The Ringer, Lombardi put Philadelphia Eagles head coach Doug Pederson on blast before the 2017 season.

In this video, Lombardi called Pederson one of the least-qualified head coaches that he had seen in 30-plus years of covering the league. Even at the time it seemed like a wild criticism, given that Pederson had been a longtime player in the league, a quarterbacks coach, and the offensive coordinator of the Kansas City Chiefs. Of course, as you may know, Pederson led the Eagles past Tom Brady and the Patriots to win the Super Bowl at the end of the season. This was in spite of losing his starting quarterback Carson Wentz to injury.

.@mlombardiNFL wants to know if the Eagles will admit their mistake or if they'll throw away 2017 by sticking to the Pederson principle pic.twitter.com/Vw3ubDzBic

The hyperbole was pretty intense, especially considering Lombardi’s recent track record in hiring NFL head coaches. After all, when he was general manager of the Cleveland Browns, their head coaching hires were Rob Chudzinski and Mike Pettine, who didn’t exactly etch their names in NFL history alongside George Halas and Curly Lambeau.

As the Eagles were on their way to the Super Bowl, Lombardi’s criticism was something of a rallying cry for the Eagles and their coach. And while winning a championship is all the justification that Pederson needed, we’ve learned just a little bit more about the extent of Pederson’s vindication.

Peter King’s Football Morning in America column at NBC Sports tells the story of Lombardi writing a personal apology to Pederson, but that’s not all. Apparently Pederson was given the choice of working with Lombardi to be a co-author for his book. He said no.

One bit of the book stuck out to me. Pederson, in my time with him, comes across as a totally normal guy. He remembers precisely where he came from, and doesn’t think his job today is any more important to his players than his job was coaching high school football a decade ago in Louisiana. But he remembers slights—and one in particular. The week before the 2017 season, Mike Lombardi, a long-time NFL front-office man who was working for The Ringer, wrote about Pederson: “Everybody knows Doug Pederson isn’t a head coach. He might be less qualified to coach a team than anyone I’ve ever seen.”

That got a ton of attention last year when Pederson was on the road to winning the Super Bowl. Pederson, in the book, says Lombardi wrote him a letter during the playoffs last season. “It was written on a typewriter, and was about three paragraphs long,” Pederson writes. “The letter said, ‘The first rule of any informed opinion is to never began with the end in mind. And I violated that rule. For that, I extend my sincere apology.’ I was appreciative, and at least it showed he was man enough to admit he was wrong.”

Then this: “After the Super Bowl, the possibility of writing this book came up. One of the interested companies thought Lombardi would be a great co-author and submitted an offer. I said, respectfully, ‘No thanks.’ “

It is commendable that Lombardi would take the time to go out of his way and apologize to Pederson after criticizing him so harshly. And it may be equally as impressive that he used a typewriter – apparently they still do exist!

That would certainly be an awkward conversation regarding Pederson’s book, though. Perhaps it would be a selling point that Pederson could use one of his biggest critics (and for the record, Lombardi wasn’t the only one skeptical of the hire, even if he was the most vocal) could write the best endorsement. But it’s also understandable why Pederson would pass – it’d be like asking LeBron James if he wanted Skip Bayless to write a foreword for him about why he’s such a clutch player and great ambassador for basketball.