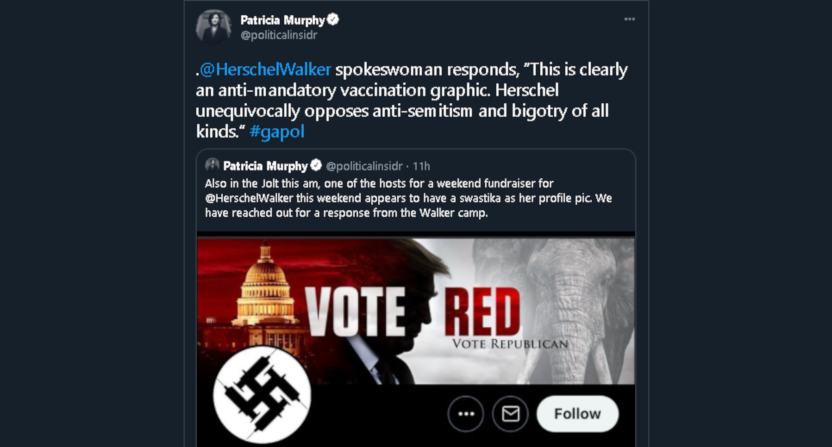 Former USFL and NFL running back Herschel Walker is now running as a Republican candidate for a Senate seat in Georgia, and he’s been endorsed by former U.S. president Donald Trump. That’s led to some interesting discussions, especially this week around Walker going to a fundraiser hosted by Bettina Sofia Viviano-Langlais. Her current profile picture on Twitter is a swastika (an ancient Buddhist symbol, but one more recently known for its association with the 20th century Nazi Party in Germany) composed of vaccine injectors. That led to one of Walker’s spokespeople claiming Wednesday (while still planning to go ahead with this fundraiser appearance) that this wasn’t a swastika, but was instead “clearly an anti-mandatory vaccination graphic”:

Spokeswoman for Trump-endorsed Senate candidate Herschel Walker: This is not a swastika. "This is clearly an anti-mandatory vaccination graphic."

Later on Wednesday, though, Walker’s camp changed their tune, as per Greg Bluestein of The Atlanta Journal-Constitution:

In another statement hours later, the campaign disavowed Viviano-Langlais’ usage of the symbol and said Walker opposed antisemitism and bigotry “in all forms.”

“Despite the fact that the apparent intent behind the graphic was to condemn government vaccine mandates,” the campaign said, “the symbol used is very offensive and does not reflect the values of Herschel Walker or his campaign.”

And they then eventually agreed to pull out of this fundraiser, as per Ted Johnson at Deadline:

The campaign of Herschel Walker, the former football star running for a U.S. Senate seat in Georgia, canceled a planned fundraiser with a producer who had featured the image of a swastika made with vaccine needles in her Twitter profile.

Viviano-Langlais did not immediately respond to a request for comment. But she posted to Twitter earlier on Wednesday, “I am the poster and because of the Left’s need to silence free speech I took it down. It’s insane to think that pic was Anti-Semetic. Desperate actually. It was a pic showing what happens when fascists demand people insert foreign material into their body they don’t want…”

Walker has never previously held political office. He endorsed Georgia Republicans in 2014 and 2018, and endorsed Trump in 2016 and 2020, then spread false conspiracy theories decrying Trump’s loss after the 2020 election. His main accomplishments to this point are running for 5,259 yards in three seasons at Georgia, posting 5,562 rushing yards across three USFL seasons (all for Trump’s New Jersey Generals),  and recording 8,225 NFL rushing yards across 12 seasons. Oh, and he was traded for pieces that built the foundation of the Dallas Cowboys’ 1990s Super Bowl dynasty. Now, apparently, it takes him and his campaign a full day to decide that a swastika is in fact a swastika.