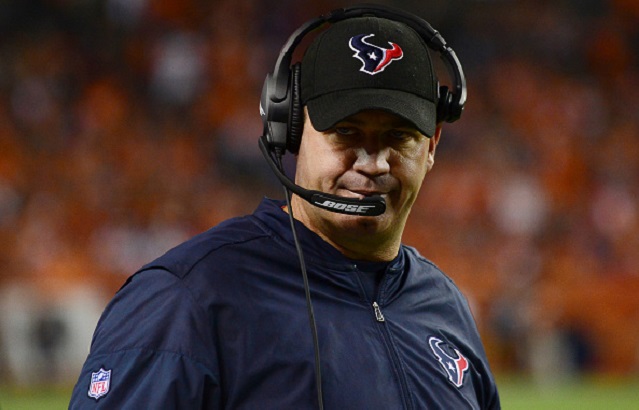 Bill O’Brien’s time in Houston saw him accumulate more and more power, but his time there is now at an end. O’Brien started off with the Texans in 2014 as a head coach who was very much under GM/executive vice president of football operations Rick Smith, but Smith left after the 2017 season, and the team fired replacement GM Brian Gaine ahead of the 2019 campaign, essentially giving O’Brien GM powers then. They made that official after the 2019 campaign when they axed interim GM Chris Olsen (who O’Brien still had final power over) and gave O’Brien the GM tag in addition to his head coach role. This past week then saw reports that O’Brien would have more of a direct role in game-planning and play-calling as well, but after a 31-23 loss to the Minnesota Vikings under that new structure dropped Houston to 0-4, the Texans opted to part ways with O’Brien altogether. Here’s more on that from Jordan Dajani at CBS:

O’Brien has been with the Texans since 2014, and has registered a record of 52-48. Houston reached the postseason four out of the last six seasons, but won just two postseason games. Jack Easterby is in charge of the organization with O’Brien out as GM, La Canfora reported.

…O’Brien had been clashing with prominent players at practice, and taking over play-calling duties was his last attempt to salvage things within the organization, according to La Canfora. That move was another misstep, as the Texans went 3-of-12 on third down conversions, turned the ball over once and were dominated in time of possession during their fourth consecutive loss on Sunday. Another move that reportedly rubbed players the wrong way was O’Brien’s push to bring in free agent safety Earl Thomas — a potential addition which was reportedly met with strong pushback by the Texans locker room.

It’s certainly notable to see this kind of a move after the Texans had put so much trust in O’Brien as both head coach and GM. And O’Brien’s moves in both capacities had taken some criticism before this, but the team stuck with him anyway. Still, there were some reasons that this wasn’t trending well.

Yes, Houston had made the playoffs four times in O’Brien’s six full seasons, and won four divisional titles along the way. But the Texans only won two postseason games in that span (beating the Oakland Raiders 27-14 in the 2016-17 playoffs, and edging the Buffalo Bills 22-19 in overtime last season), and they were never seen as much of a contender by anyone (as illustrated by all four of those playoff appearances under O’Brien featuring games in the Saturday afternoon wild-card slot, generally the least-prominent and lowest-rated window). They also went 52-48 in the regular season under O’Brien.

And O’Brien made a lot of questionable moves as GM, both acting and titled. As per ESPN’s Adam Schefter, the Texans’ currently have the NFL’s highest player payroll this year ($248 million), and they’re facing some cap crunches ahead. And they made some odd moves this past offseason, especially with trading DeAndre Hopkins and a fourth-round pick for David Johnson, a second-round pick and a fourth-round pick. So there’s some logic to moving on from O’Brien especially after this 0-4 start (granted, with three losses to good teams, but still). But whoever takes over from him isn’t inheriting the easiest situation.