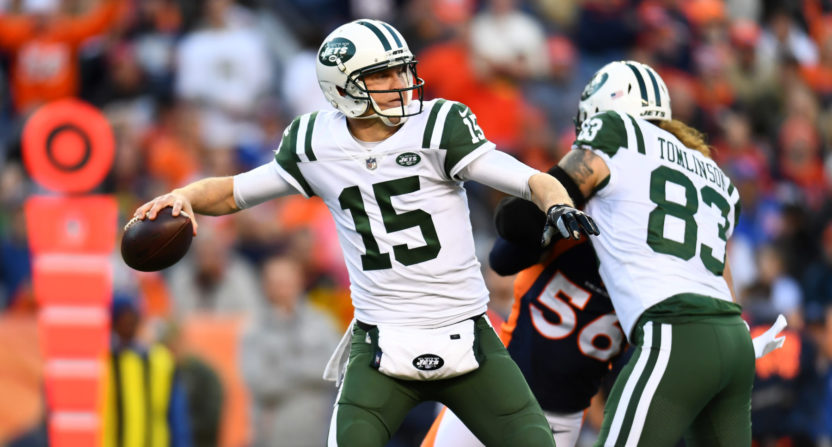 If you were trying to come up with the perfect situation to sum up everything that Brian Flores was saying with his lawsuit against the NFL over racial discrimination, you couldn’t possibly do any better than the Houston Texans reportedly have.

According to multiple reports, the Texans are down to two candidates for their head coaching position after informing Eagles defensive coordinator Jonathan Gannon that he was no longer under consideration. Those two candidates would be former Dolphins head coach Brian Flores and former NFL quarterback Josh McCown.

Multiple league sources have either been told or seen notification —and shared with me—Eagles DC Jonathan Gannon was informed, as of yesterday, he would not be receiving the head coach job for the #Texans, at said time. The process is ongoing.

The Texans let Eagles DC Jonathan Gannon know that he is not getting the job per @JosinaAnderson.

The finalists are reportedly Brian Flores and Josh McCown. pic.twitter.com/iNVjsToJhB

Flores spent three seasons as the head coach of the Dolphins, turning in back-to-back winning seasons before being fired under what many considered dubious reasons. Prior to that, Flores spent a decade on the New England Patriots coaching staff where he was part of four Super Bowl champions. He also spent time in the Patriots scouting department. Flores has been on the interview list for just about every open head coaching position during the last few weeks.

McCown is a long-time journeyman NFL quarterback who has never coached at the college or NFL level at any point in his career. He has worked as a volunteer quarterbacks coach and as an assistant coach for his sons’ high school football team. McCown is very good friends with Texans EVP of football operations Jack Easterby. No other NFL team formally interviewed McCown for their open head coaching positions.

Incidentally, Flores is black and McCown is white.

If you pitched a movie about racial inequalities in the NFL and used this as your storyline, you’d get laughed out of the room for being too on the nose.

Naturally, you can understand why the initial reactions to this report are what they are.

#Texans reportedly had 3 finalists. One, Gannon, has reportedly been told he's not their next head coach. That leaves Brian Flores & Josh McCown. One of them has been an NFL coach for the last 14 seasons(last 3 as HC), & was scouting for 4 seasons prior to that. The other hasn't. https://t.co/S9dKCABLZY

Of course the Texans HC job comes down to Brian Flores and Josh McCown. And we know who’s getting it. It’s way too on the nose, but the NFL doesn’t believe in subtlety.

The Texans hiring Josh McCown would be hilarious

There are literally 1,000s of more qualified coaches https://t.co/gvzGytOTJv

If the Texans hire Josh McCown, will it be the most embarrassing moment in franchise history?

I just can’t believe the Texans would hire McCown. Not even them. Not even one of the worst orgs in all of sports would do that, right?
Right?

If Josh McCown gets the job over Flores, the Texans might as well change their name to the Houston Campanises https://t.co/sbECnY5ViI

We’re all in eager anticipation of what wild excuse the Texans are going to use when they don’t hire Flores. But we’ll probably find out how it all plays out very soon. Get your takes ready.