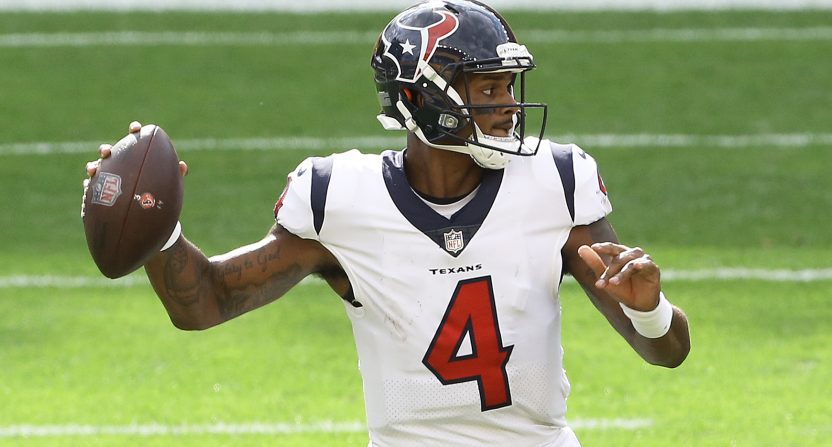 The top topic of the NFL offseason has been where Houston Texans quarterback Deshaun Watson will end up playing in 2022.

It was assumed that it was between the Atlanta Falcons and the New Orleans Saints after Watson personally rejected all but those two teams.

It seems that he has changed his mind as reports have come out on Friday that Watson wants to play for the Cleveland Browns, and will waive his no-trade clause to be dealt there.

Deshaun Watson has decided he wants to play for the Cleveland Browns in a stunning change of events, per sources. Watson has informed the Houston Texans that he now is willing to waive the no-trade clause in his contract to be dealt to Cleveland.

Watson had previously met with the team and expressed some interest to go there before ultimately ruling them out on Tuesday and changing his mind on Friday.

These shocking reports have gotten the NFL world talking, with many confused by this chain of events this week.

I ain’t even mad, been feeling super conflicted about all this https://t.co/1W6AWU7vNR

These reports have quickly been answered by the Browns, as it now appears that the team will in fact trade for Deshaun Watson in return for three first-round picks as well as a third-round pick and a fifth-round pick for the former three-time Pro-Bowler.

This also means that the team will be accommodating Baker Mayfield’s trade request, despite saying previously that they would not.

The full details of the trade has the NFL world speculating on if it is ultimately worth in for the Browns considering all of the picks that they will be giving up.

Cleveland is really banking on Deshaun Watson not being creepy again. Oh and for the rest of the team to not drop passes and commit penalties at the worst possible time. And not be inept on special teams. And not be the Browns.

Other than that — interesting trade. https://t.co/NPZogzeAvE

This will backfire on Cleveland. https://t.co/vUszPsTx2E

Though many feel that it might be a bit of an overpay, others recognize the talent that Watson has shown on the field and believe that it could certainly lead to some success for the Browns moving forward.

From a football only perspective — absolutely worth it. https://t.co/iLmbvkFgtG

This is a lot, but if Watson stays on the field, I can promise this will be worth it for Cleveland. https://t.co/KBseEQf69e

This news is also massive because it was really the domino piece for the rest of the league to now make their quarterback decisions, including the Saints and Falcons now that they are out of the Watson sweepstakes.

Whether Watson can stay on the field will ultimately decide whether or not this is a good trade for the Browns going forward. At his best he is an elite quarterback that has shown before he can lead his team to the playoffs.

At his worst, he is a complete public relations nightmare with still pending civil lawsuits against him, and a waste of some valuable picks for the Browns.