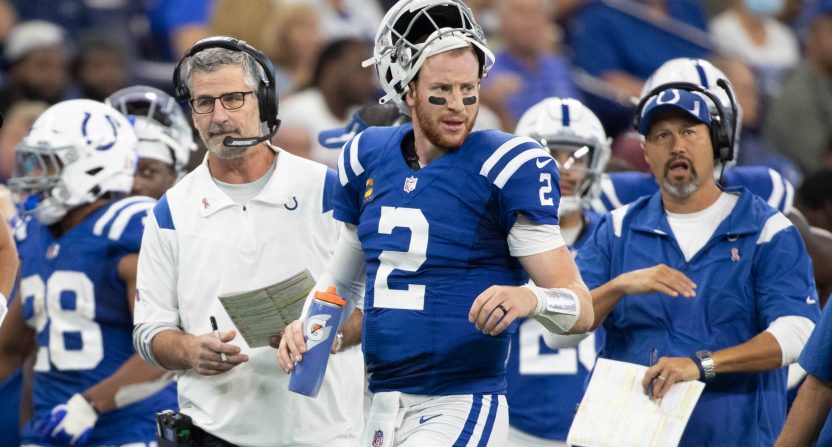 Your favorite NFL team is winless. Is it time to give up hope? Maybe not.

Yes, the chances of making the playoffs are remote. Since 1978, only six of 228 teams have rallied from 0-3 to reach the postseason. However, this is the first 17-game regular season in league history and only the second season since the NFL expanded the playoffs to include 14 teams.

None of these franchises may reach the playoffs. But how confident should you feel about your team’s future? Let’s discuss.

Indianapolis is off to its worst start since the dreaded 2011 season (2-14) when Peyton Manning (neck surgery) sat out the entire year. Remember the Curtis Painter Experience?

Blame the broken remains of Carson Wentz if you want. He has bad ankles while playing behind an underachieving offensive line. No amount of Frank Reich coaching magic is going to automatically fix that. Simply put, these Colts are too talented. What they need is better health, and getting Wentz, Quenton Nelson, T.Y. Hilton, Kwity Paye, and Darius Leonard closer to 100 percent will help.

Wentz might not be an upgrade over Philip Rivers. But he may not have to be for the Colts to return to the playoffs. The biggest positive for Indianapolis is its own division, the lousy AFC South. The Colts will play the Houston Texans and Jacksonville Jaguars twice. In fact, Indianapolis has the third-easiest schedule remaining. That should come as a welcome relief after facing the Seattle Seahawks, Los Angeles Rams, and Tennessee Titans.

Detroit entered this season with the second-lowest win total odds (4.5). While they’re winless, the Lions have played hard for first-year coach Dan Campbell. In Week 1, they staged a furious rally before falling to the San Francisco 49ers 41-33.  Last week, they were a nine-point home underdog to the Baltimore Ravens. They would have won if not for Justin Tucker’s NFL record 66-yard field goal at the gun. What a heartbreaking way to lose.

The Lions have the league’s second-youngest roster, and they lost second-year cornerback and former first-round pick Jeff Okudah for the season with a torn Achilles tendon. The defense did a reasonable job of containing Lamar Jackson. But Detroit is limited on offense with Jared Goff. He’s just not good enough to be a franchise quarterback. But if he’s careful with the football, the Lions might pick up their first victory on Sunday at the Chicago Bears.

The Jaguars, losers of 18 straight, haven’t won since their 2020 season-opener. The modern-day record for futility is 26 in a row.

The good news is that Trevor Lawrence is getting a lot of snaps, which is exactly what the rookie needs. He’s ninth in the league in pass attempts (118) and is pushing the ball downfield (fourth in intended air yards). Unfortunately, he’s also tied for the league lead in interceptions (7). But the offensive line has done a decent job, and the rushing attack is averaging 5.1 yards per carry, led by James Robinson (5.2).

What’s most troublesome is that the Jaguars haven’t even reached the toughest part of their schedule. They still have games left against the Tennessee Titans (twice), Buffalo Bills, Seattle, San Francisco, and the Rams. Still, Jacksonville could be much better down the stretch, especially if it solves its kicking woes (0-for-3 on field-goals tries, two missed extra points).

Confidence level: Very low but with potential to improve

Sam Darnold’s improvement in Carolina have some wondering if the Jets gave up on him too early. Let’s face it. New York probably would still be winless with Darnold. The Jets entered the season with the league’s youngest roster and a lot of holes. Rookie quarterback Zach Wilson has been hindered by possibly the NFL’s most porous offensive line. Wilson has been sacked in 12.50% of his drop-backs. That’s the second-worst figure in the league.

With no protection, Wilson has thrown seven interceptions and is the NFL’s lowest-rated passer. The Jets have scored a grand total of 20 (20?!?) points. That’s put way too much pressure on a defense that has played well (328.3 yards per game total allowed), keyed by defensive lineman Quinnen Williams. New York has the fifth-easiest schedule remaining. But when you’re this bad (the Jets have been outscored 46-3 in the first half), that means little.

Confidence level: Extremely low with potential to get worse

The Giants have lost two games on last-second field goals. That’s a lot of bad luck. But you could also point to the coach who’s taking a lot of heat.

Joe Judge looks like the latest disappointing Bill Belichick disciple. We haven’t seen any proof that he’s good at his job. In his rookie season last year, the Giants started 0-5. This year, they could be 0-10. Look at the upcoming schedule: the New Orleans Saints, Dallas Cowboys, the Rams, Carolina Panthers, Kansas City Chiefs, Las Vegas Raiders, and Tampa Bay Buccaneers.

What makes this all even more disheartening is that much-maligned Daniel Jones has played well enough. The trouble has been his supporting cast. Saquon Barkley is averaging 3.4 yards per carry, a season after tearing his ACL. Free agent wide receiver Kenny Golladay and rookie Kadarius Toney haven’t had much impact.

It seems likely that New York will be looking for a new coach and possibly a new general manager soon.

A BIG STOP FROM THE DEFENSE!