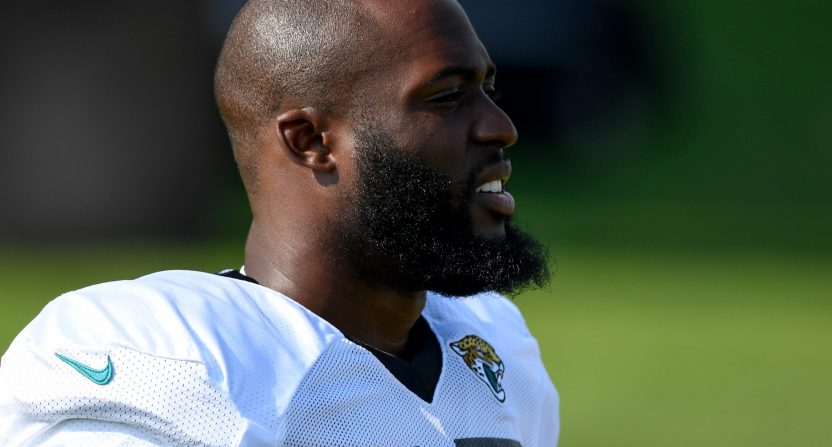 The Tampa Bay Buccaneers have never really been a glamorous destination for free agents, but this offseason has been a lot different.

First they added arguably the best quarterback of all time in Tom Brady, a move that instantly pushed them to a team of interest despite Brady’s age. Now the Bucs have added the biggest name to be cut in training camp, signing Leonard Fournette after the Jags let him go.

Former #Jaguars RB Leonard Fournette is planning to sign with the #Bucs, per me and @TomPelissero. The belief is it will get done.

Former Jaguars’ RB Leonard Fournette is signing with the Buccaneers, per source.

Fournette was rumored to be looking for a system that could really showcase his talents for what would almost certainly have been a one-year deal, with eyes on a long-term contract next offseason. That ruled out a few teams that may have otherwise been interested; Fournette was likely looking for a more traditional, power-oriented running scheme.

He’ll probably get that in Tampa, with Bruce Arians and Bryon Leftwich’s offense likely looking to keep Brady in a more traditional setup. Fournette had his issues in Jacksonville, but almost all of them were off the field. Aside from some injury concerns (not a small thing), Fournette put together some solid seasons, including last year when he ran for 1152 yards (4.3 yards per carry) and caught 76 passes for 522 additional yards.

He also, crucially, played 15 games for the Jags. When he was cut last week, Doug Marrone essentially tried to sell the move as purely a football decision, which is fairly hard to believe. Fournette may have simply worn out his welcome, though it’s important to remember that one of the people who didn’t like him was Tom Coughlin, who has built an entire NFL career out of not liking everyone at best, and being an unreasonable asshat at worst.

Coughlin was fired after last season, and it’s hard to remember now that the Jaguars were in the AFC Championship game against New England just a few years ago, coming damn close to making the Super Bowl. That season looks like a complete aberration at this point, and Doug Marrone has done little to give anyone confidence he can right the ship. The Bucs weren’t alone in their interest, either; even the Patriots were looking at Fournette, a sign that the rest of the league doesn’t have a ton of confidence in Jacksonville’s ability to evaluate talent right now.

The Patriots have expressed interest in Leonard Fournette, per source. We'll see if it leads to anything. The fourth overall pick from 2017 has been a free agent for about 24 hours.

In that sense, the release might be the best thing to happen to Fournette. Going from the sinking ship of the Jags to the pirate ship in Tampa, playing with Tom Brady and for Bruce Arians, and he won’t even have to get new license plates. The Bucs, meanwhile, add yet another good player to help, which makes a lot of sense; Brady just turned 43, after all. The whole point of bringing him in is to go for it, and these are the kind of ancillary moves teams that are going for it make.