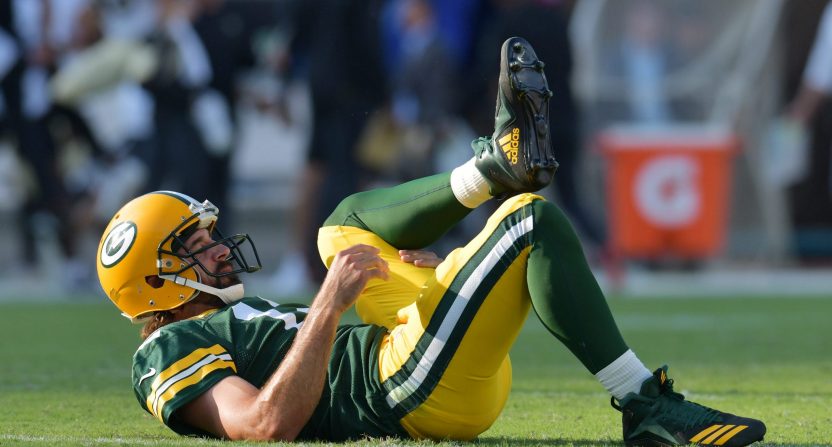 A lot can change after Week 1 in the NFL. Last year, for example, the Browns lost handily to the Ravens, but Cleveland ended up making a deeper playoff run in the end.

Let’s take a look at went wrong for some of Week 1’s disappointing teams and what it might mean for the future:

It’s not unprecedented for a Matt LaFleur-coached Packers team to play terribly out of nowhere against an NFC South team. You might remember their ugly 38-10 loss to Tampa Bay last year, a game in which Aaron Rodgers struggled. Sunday’s 38-3 loss to the Saints felt a little different.

Rodgers threw a couple of bad interceptions and never found his MVP form. Those passing struggles combined with a nonexistent run game resulted in a porous offensive showing. The defense, led by new defensive coordinator Joe Barry, was even worse. Jameis Winston tore up the Green Bay secondary despite missing his top two receivers.

It’s probably premature to be concerned about Rodgers, who is coming off a sensational MVP season and retains most of his weapons. The defense should inspire more concern. Barry’s track record as a coordinator is not promising. They will need to do a better job of pressuring the quarterback, and they may need to reevaluate the cornerback position opposite Jaire Alexander, where Kevin King struggled mightily.

We knew coming into this season that the Titans defense might be an issue. Per rbsdm.com, the Titans defense ranked 28th in EPA per play last season. Those problems reared their head in the 38-13 loss to the Cardinals, with Kyler Murray scoring five total touchdowns. The Titans main defensive upgrade was linebacker Bud Dupree, who benefited heavily in Pittsburgh from playing alongside TJ Watt. He has no such luxury in Tennessee.

The Titans offense is supposed to overcome the defense’s weakness. It will have to if they’re going to be legitimate contenders this season. It certainly wasn’t a good start, as Ryan Tannehill was hampered by heavy pressure and struggled to get going. The Cardinals pass rushers, led primarily by a possessed Jones, produced big play after big play. Jones had five sacks and two forced fumbles.

Derrick Henry was completely stifled, a bad sign for an offense that has relied for years on Henry having lanes to do serious damage. Without offensive coordinator Arthur Smith, the Titans went away from the play-action attack that helped Tannehill to great success over the past two years. They have to find a way to get back to what made them good in the past. The offensive line rebounding will be the biggest determining factor.

It wasn’t nearly as bad of a Week 1 for the Bills as it was for the Packers and Titans, but a home loss to Pittsburgh wasn’t what Josh Allen and co. were looking for. Allen wasn’t quite his MVP-level dominant self, missing a couple of throws and fumbling twice (losing one). He completed 30 of his 51 passes for 270 yards and a touchdown.

The Steelers’ defense was outstanding, though, and it’s hard to blame Allen too much for the Bills’ issues. Pittsburgh blitzed on just 1.8 percent of Allen’s dropbacks, the lowest of any team on Sunday, but still managed to pressure Allen 34.5 percent of the time, which was third-highest. Even when they weren’t sacrificing numbers in the secondary to blitz, the Steelers were breaking into the pocket. They also swarmed quickly to the ball when Allen tried to scramble, limiting his effectiveness as a runner.

It’s not getting any easier for Allen and the Bills’ o-line, as their next two games are against Miami and Washington, two more elite defenses with great pass rushers.