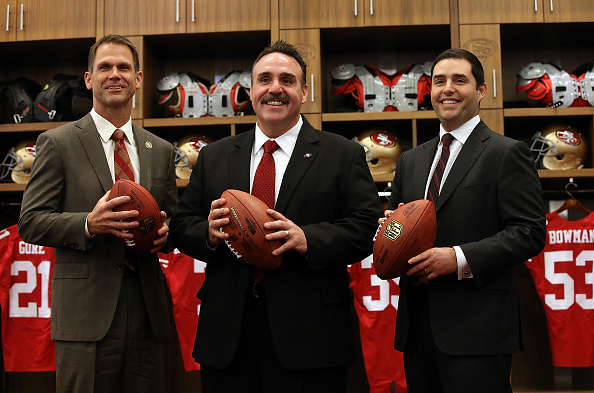 Thanks to a lethally potent cocktail of incompetence, ego and frugality, Jed York and Trent Baalke killed a once-proud San Francisco 49ers franchise in just one year with one really horrific decision.

That decision, to fire successful head coach Jim Harbaugh and replace him with the inexperienced and overwhelmed Jim Tomsula, looks to have come full circle.

The news of Tomsula’s firing should come as absolutely no surprise. In a combined 72 regular season and playoff games on the job, Harbaugh’s 49ers lost by 14 or more points just six times. Through the first 15 games of 2015, Tomsula’s iteration of the 49ers lost by 14 or more points eight times. (Of course, the 49ers won in overtime of a meaningless game in Week 17. It’s almost fitting.)

It’s been a disastrous year for the 49ers, specifically York and Baalke, that has seen onsite attendance drop, on-field success disintegrate and hope amongst the fan base wane. The situation is so unappealing, especially in light of the fact that the team’s stadium will play host to February’s Super Bowl L, that the words “rebuild,” “retool” and “reload” simply aren’t enough.

This is a franchise that needs a full-on re-branding effort if it has any desire to reclaim even a shred of the respectability that was lost in the post-Harbaugh era.

This is how the San Francisco 49ers do just that.

Step 1: Beef up the front office by hiring a “football man”

The two faces most synonymous with decision making inside the San Francisco 49ers front office—CEO Jed York and General Manager Trent Baalke—inspire virtually no confidence whatsoever amongst the fan base. That’s the type of public relations face plant one should expect when you fire a head coach who won 68.7 percent of his regular season contests while qualifying for three NFC Championship games and one Super Bowl during a remarkable four-year run that included Associated Press NFL Coach of the Year honors in 2011.

As a result of voluntarily making the switch from the ultra-successful Harbaugh to the bumbling, in-over-his-head Tomsula, York and Baalke will have an arduous time selling any new coaching hire to the fan base for the simple reason that it’s York and Baalke doing the hiring. After all, if you thought Jim Tomsula was the right man for the gig when the rest of the coherent football world knew that such a move would result in nothing short of failure, why should anybody believe that the next man on your list would fare any differently?

Further complicating matters is the idea that some well-respected and previously successful coaching candidates may cast a suspicious eye upon San Francisco’s leadership group given how it ran a winner like Harbaugh out of town. The persistent media leaks, undermining and eventual dismissal reeked of something shady and insidious the likes of which is rarely, if ever, seen within the ranks of a successful and profitable professional sports franchise. This is perhaps the biggest hurdle the 49ers will face in luring a marquee candidate to town for the 2016 campaign, which is why York and Baalke need to be removed—at least from the public’s eye—in regards to the next hire.

Say what you want about his stops in Dallas and Miami, Parcells is well respected and carries an abundance of cache within NFL circles and was the guy who found an unknown signal-caller named Tony Romo slinging it all over the field at Eastern Illinois, demonstrating that the man understands how to identify talent.

With Parcells in the mix and billed as the front man for the organization’s re-brand, the fan base could rest assured that at the very least, York and Baalke won’t be the individuals pulling the trigger on the next coaching hire in the wake of the Tomsula debacle.

Step 2: Back up the Brink’s truck for Sean Payton

Parcells’ reputation and resume serve as one benefit to his hire, but his connections and relationships are the primary reason why the 49ers would be wise to bring him into the fold.

Specifically, as it relates to New Orleans Saints head coach Sean Payton, who served as assistant head coach/quarterbacks coach under Parcells in Dallas from 2003-2005.

Currently under the employ of the Saints, whom he’s worked for since 2006, there are rumblings within NFL circles that a parting of the ways could be coming between Payton and New Orleans much like what happened during the 2012 divorce between Andy Reid and the Philadelphia Eagles. Sometimes both parties realize that the situation has become stagnant and a fresh start would be mutually beneficial.

Should Payton find his way onto the open market, this is where the hiring of Parcells would be worth its weight in gold. Payton was the architect of New Orleans’ Super Bowl win over Peyton Manning and the Indianapolis Colts in February of 2010 as well as the individual who helped transform quarterback Drew Brees from San Diego castoff to future Hall of Famer. Prior to Payton’s arrival, the Saints had posted just one ten-win season in 13 years. Since Payton’s hiring, New Orleans has won ten or more games five times in ten seasons.

But more importantly, Sean Payton knows how to score points and develop quarterbacks, two departments in which the 49ers were severely lacking in 2015. For proof, look no further than the fact that during Payton’s ten-year stint in New Orleans, the Saints featured a top-five scoring offense five times and a top-10 scoring offense eight times.

But a capable NFL head coach can only go so far as his triggerman takes him. And while former Jacksonville Jaguar Blaine Gabbert has displayed flashes of serviceability in place of Colin Kaepernick this season, he’s not the future of the franchise.

A re-branded front office and sparkling new coaching staff are a commendable start to any NFL rebuild, but without a confidence-inspiring quarterback, the fan base will still have its doubts.

So what better way to signify the commencement of a new era in 49ers football than by utilizing the team’s upcoming high draft selection on one of the college football world’s top quarterback prospects?

Jared Goff, the 6-4, 215-pound junior signal-caller from California who just put the finishing touches on a 4,719-yard, 43-touchdown campaign for the Golden Bears, would be the ideal candidate. He grew up in Marin County just north of the Golden Gate Bridge and is regarded by many as the top quarterback prospect in this year’s draft class. What’s even more ideal is the fact that current 49ers quarterback Blaine Gabbert costs just $1.75 million in base salary for the 2016 season, so Parcells and Payton could throw him to the wolves for a year while Goff sits and learns the intricacies of an NFL offense while simultaneously adding some bulk to his relatively slim frame.

Paxton Lynch, the 6-6, 245-pound gunslinger from Memphis completed a career-high 66.8 percent of his passes for the Tigers in 2015 while tossing 28 touchdowns to just four interceptions. Should Goff be off the board by the time the 49ers hit the clock or if the organization decides that Lynch would be a better fit for what the team wants to do offensively moving forward, San Francisco still winds up with its new “face of the franchise,” which will go a long way in terms of both jersey and ticket sales as well as re-branding the franchise’s image in the wake of the Harbaugh-Tomsula disaster.

Whether you prefer Goff’s gaudy numbers and local upbringing or Lynch’s off-the-charts physical skill set, the bottom line is that the 49ers need a young quarterback to jump-start the team’s new era.

This is a simple move with potentially significant and impactful results for the team’s re-branding efforts. In essence, the San Francisco fan base isn’t interested in hearing from or seeing at the forefront Jed York and Trent Baalke. The tandem represents an era of suspicious activity, unnecessary frugality, deception and one really horrific coaching decision.

So spend some money and bring back one or two or three individuals who represent all that is right with the 49ers legacy in Joe Montana, Jerry Rice and Steve Young. In this situation, you aren’t asking any of the three to put in long hours or even involve themselves in the decision-making process. You’re simply trying to put trusted, beloved and well-respected faces on a product that has lost considerable support in the past year.

These are the faces you want at all the ribbon-cutting events, marquee press conferences and meet-and-greets.

How great would a May press conference look with a table featuring Bill Parcells, Sean Payton, Joe Montana and Jared Goff, all decked out in red and gold, addressing the media?

Step 5: Out with the new, in with the old

Whether you like San Francisco’s alternate black jerseys or not, the bottom line is that they represent an era of both futility and failure for the once-proud 49ers.

So while the organization is busy trumpeting its new front office, coaching staff, quarterback, ambassadors and Santa Clara stadium, why not bring back the red and gold helmet and uniforms worn by the multiple Super Bowl-winning 49ers of the 1980s?

Jed York spent last year’s press conference talking about “winning with class,” Bill Walsh and raising Super Bowl banners. What better way to pay subtle tribute to the franchise’s greatest era while subtly reminding the paying customer about the greatness of what this product used to represent by trotting out the gorgeous threads rocked by Montana, Rice, Craig, Taylor and so many other San Francisco legends?

Not only that, but you’ve found yourself another sellable opportunity where fans can plunk down that hard-earned cash to purchase Jared Goff or Paxton Lynch throwback jerseys.

Perhaps this is too ambitious and optimistic a blueprint for Jed York and Trent Baalke. Or, perhaps a similar plan will take shape but with different names and faces than those suggested above. But the bottom line for this historic and once-proud franchise that may, in fact, have been too focused on the bottom line in recent years, is that in order to restore greatness and inspire hope, the San Francisco 49ers must first distance themselves from a recent past littered with failure.

A 2003 graduate of Penn State University and 2006 graduate of Thomas Jefferson School of Law, Fortenbaugh co-hosts "Chad, Joe and Lo" on 95.7 The Game in San Francisco, which airs Monday-Friday, 6-10am pacific.