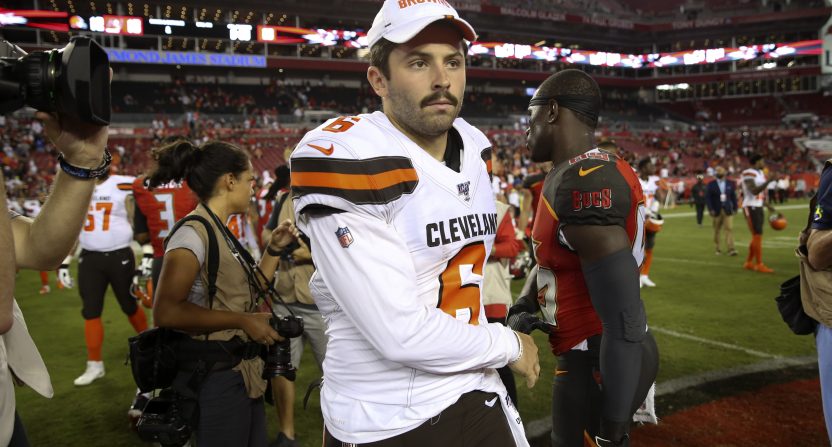 The NFL is an interesting place these days. Guys are retiring early because football hurts. A rookie coach trolled his own player by playing Jay-Z songs during practice.  One of the league’s most high-profile owners is facing charges of soliciting prostitution after being caught up in a sex sting operation.

Meanwhile, Bill Belichick is probably on his couch, eating a peanut butter and jelly sandwich, watching tape and laughing maniacally as he tries to win his seventh Super Bowl. Belichick is the ultimate wrestling heel because he keeps winning with a quarterback who (suspiciously) doesn’t age, assistants who become lousy head coaches, and mostly interchangeable parts.

Last year, the Patriots lost to Jacksonville, Detroit, Tennessee, Miami, and Pittsburgh. What did those teams have in common? None made the playoffs. And yet, in the postseason, New England beat arguably the three best teams: the San Diego Chargers, Kansas City Chiefs, and Los Angeles Rams. #Huh? It’s like Belichick has the Infinity Gauntlet.

Will someone steal it, snap their fingers, and make the Patriots go away?

FirstEnergy Stadium is no longer The Factory of Sadness.

The Cleveland Browns appear to be a contender. There’s so much young talent: Baker Mayfield, Myles Garrett, Nick Chubb, Denzel Ward, and Kareem Hunt- all under the age of 25. In a salary cap sport, this is what general managers crave. Good players under cheap contracts is the best way to win immediately. Their most expensive asset is Odell Beckham. At $16.7 million this season, that’s reasonable for a top-five receiver.

Cleveland is embracing the hype. Mayfield keeps talking for a guy with a 6-7 record as a starter. Beckham keeps talking like a scorned lover. And coach Freddie Kitchens keeps talking as if he has access to subpoena power, a polygraph and NSA wiretaps.

The Browns could start 3-4 with games against the Rams, Ravens, Seahawks, and Patriots. The backend of the schedule is more manageable. In their final six games, they play the Bengals (twice), Dolphins, Cardinals. Plus, the addition of Hunt after serving an eight-game suspension should be a significant boost.

If the Browns make the playoffs for the first time since 2002, we might need a new “Fun Times in Cleveland” video.

These guys should NOT be starting

Ereck Flowers, G, Washington – Football is complicated, and offensive line play can be difficult for a layman to evaluate. But we’ve seen Flowers’ work, and even a child can tell you it’s lousy. Flowers was a bad player on one of the NFL’s worst offensive lines with the Giants. You shouldn’t trust Flowers to protect cheese from mold.

Eli Manning, QB, New York Giants – By one metric, Eli Manning has been the NFL’s worst quarterback since 2016. His QBR of 48.2 is lower than (gulp!) Blake Bortles (49.2). You could blame his offensive line. But he’s 38 and hasn’t been good since 2015. Rookie Daniel Jones need to be playing and developing. Manning is impeding progress.

Ryan Fitzpatrick, QB, Miami Dolphins – Fun fact: Fitzpatrick had four 400-yard passing games last season. Brett Favre had one in his 19-year career. Fitzpatrick averaged 295.8 passing yards per game and Tampa Bay STILL let him go. Fitzpatrick, 36, is a good backup but wildly erratic. The Dolphins traded for Josh Rosen and need to find out if the 22-year-old has a future.

Golden Tate, WR, New York Giants – Tate is best known for a touchdown he didn’t actually catch: The Fail Mary. He’s had a good career, but according to the advanced metrics he was the NFL’s worst wide receiver last year. The Giants signed him as a free agent to fill the role vacated by Beckham. But he will miss the first four games due to suspension.

Which NFC North team will see its season end on a missed kick?

Kickers! They may not be real football players, but lord help you if you have a terrible one. They can jumpstart a dynasty or forever live in infamy. While his teammates sacrifice their bodies, sometimes the outcome is determined by a dude who might not need a post-game shower.

Last season, the Vikings had the NFL’s worst kicking game (22-of-32 on field-goal attempts). Minnesota initially entrusted its kicking duties to rookie Daniel Carlson, who was cut after missing three (3!) in a 29-29 overtime tie with Green Bay. They brought in former Dallas kicker Dan Bailey, who finished up the season 21-of-28 – the second lowest percentage (75%) in the league. To compete with Bailey, Minnesota has traded for Kaare Vedvik, who has never kicked before in a regular-season game.

This is tough for a franchise that has endured two of the most memorable blown kicks in playoff history:

Take heart Vikings fans. You have company– in your own division. Former Chicago Bears kicker Cody Parkey (23-of-30, 76.7%)) was the NFL’s third-worst kicker. He endured a horror show in a regular season loss to Detroit by missing two field goals and two extra points. All four kicks hit the uprights. His career with Chicago ended after he missed a potential game-winner 43-yarder in a playoff loss to the Eagles. His kick hit (you guessed it) hit the upright. NFL replays later showed that the kick was blocked by Treyvon Hester.

No matter. Parkey was the fall guy and cut. Chicago’s search for a reliable kicker has been a reported mess, and now unproven Eddy Pineiro is the guy.

Vic Beasley, DE, Atlanta Falcons – He was supposed to be the next pass-rushing superstar on a speedy Atlanta Falcons defense. In his second season, Beasley terrorized quarterbacks on the way to a league-leading 15.5 sacks in 2016. Since then, he’s had a grand total of 10. Atlanta picked up his contract option, but this could be his final season there.

Marcus Davenport, DE, New Orleans Saints – Yes, this is only his second season. But the Saints traded up to No. 14 to select a player from a small school (University of Texas-San Antonio). That’s risky when you consider the move cost New Orleans two first-round picks (2018 and 2019) and a 2018 fifth-rounder. In his rookie year, Davenport had only 4.5 sacks and did not a start a game.

Jameis Winston, QB Tampa Bay Buccaneers / Marcus Mariota, QB, Tennessee Titans –The two top picks of the 2015 draft are both entering the final season of their contracts. Winston has had well-documented off-season issues. If new coach Bruce Arians — a quarterback guru — can’t improve Winston, no one can. Mariota has been solid, but he hasn’t been great. His problem might be a lack of supporting talent and/or the right coaching.

Kliff Kingsbury, Arizona Cardinals coach– He didn’t earn this job based on merit (35-40 in six seasons at Texas Tech). The Cardinals are taking the biggest coaching gamble in recent memory. Better guys than him (Nick Saban and Chip Kelly) have failed in the pros. What makes anyone think Kingsbury will do better?

Coach of the Year: Any Reid (Kansas City Chiefs)