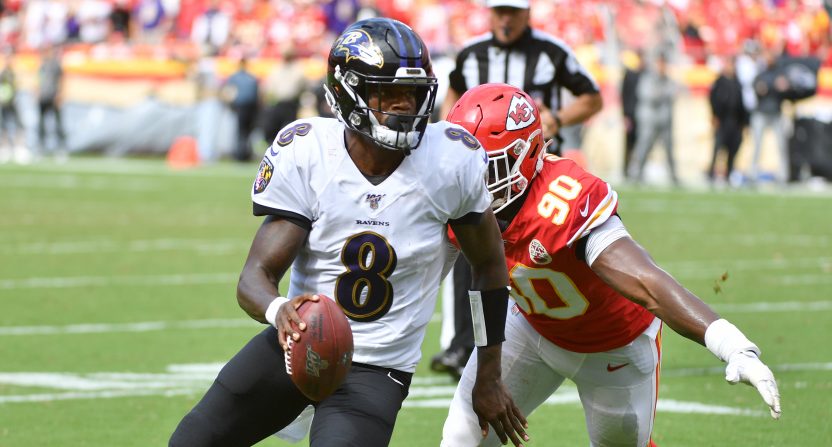 So, you’ve decided to watch the National Football League. Congratulations! Wash your hands, wear a mask, and say a prayer. Buckle up folks, it’s going to be a bumpy ride.

Get ready for the most bizarro NFL season in history. Unlike the other pro sports, this league had plenty of time to put together a comprehensive COVID-19 plan. The good news: very few players have gone on the COVID-19 Reserve List. The bad news: a few weeks ago there were reportedly several false positives. Without a bubble environment, it seems inevitable that some key players are going to test positive.

Heck, 66 have already punted on 2020, opting out of the season due to the pandemic. The New England Patriots were hardest-hit with eight players saying “Nah, I’m good.” And yet, somehow Bill Belichick probably will find a way for another stand-up comedian to score four touchdowns in a game.

The season will start cold turkey with no exhibition games. What’s new?

The last stand for the old guard?

There will be four starting quarterbacks who are at least 38 years old: Tom Brady (43), Drew Brees (41), Philip Rivers (38), and Ben Roethlisberger (38). Brady, Brees, and Roethlisberger have combined for 11 Super Bowl trips, nine Super Bowl victories, and five Super Bowl MVPs. Rivers could be the best QB to never reach a Super Bowl. This might be the final shot for all of them. The star QBs are getting younger. 2019 MVP Lamar Jackson is 23. 2018 MVP and reigning Super Bowl MVP Patrick Mahomes will turn 25 in a few weeks.

His career started in 2000. Facebook, Air Fryers, iPhones Uber, and Fitbits didn’t even exist then. Brady, who’s friendly with a doctor who’s not an actual doctor and runs his own fitness and nutrition store, has stiff-armed the aging process. TB12, the league’s oldest active player, is in an ideal situation at Tampa Bay with better wide receivers (Chris Godwin, Mike Evans) than he had last year in New England. Plus, he brought along Gronk.

The most accurate quarterback in NFL history “completely missed the mark” with his offseason comments on players kneeling during the national anthem. Brees has apologized, and now we can return to focusing on his late-season struggles. His arm strength has diminished, and he hasn’t played well down the stretch. The Saints might have the best roster in the NFL, but can they overcome Brees’ growing limitations?

Fun fact: Brees had a cameo appearance in Entourage.

Rivers throws the football like he’s pushing a shopping cart. Now he’s older, more mistaken-prone, and as mobile as a brick building. The Colts think they have upgraded even though Rivers’ passer rating (88.5) last year wasn’t much better than Jacoby Brissett’s (88.0). The fossilized remains of Rivers will be operating behind the best offensive line he’s ever had, and Colts coach Frank Reich was his offensive coordinator with the Chargers (2014-15).

The serial Twitter blocker has had a change of heart. He reportedly has unblocked several people who have in the past said derogatory things about him. (He claims that his social media team runs his Twitter account). It’s a whole new Ben. Will he have a whole new healthy arm after missing most of last season due to an elbow injury? In his last full season, Roethlisberger led the league in passing yards, but the Steelers QB no longer has Antonio Brown.

Fun fact: Roethlisberger is the only player in NFL history with three 500-yard passing games.

Kansas City and Baltimore are so far ahead of everyone else. They have the two best quarterbacks in Patrick Mahomes and Lamar Jackson, and two of the best coaches in Andy Reid and John Harbaugh. Mahomes overcame three straight games of double-digit deficits to win a Super Bowl. Jackson won the MVP with the worst collection of wide receivers he’ll likely have going forward in his career.

The biggest concern for the Chiefs might in the defensive backfield. Cornerback Bashaud Breeland will miss the first four games for violation of substance-abuse policy. And last year’s other starting corner Kendall Fuller signed as a free agent with Washington.

The biggest concern for the Ravens might be replacing Pro Bowl safety Earl Thomas, who was cut following an altercation with a teammate. Thomas might be a pain in the arse, but he’s a Hall of Fame player even at the age of 31.

Todd Gurley, RB, Atlanta Falcons – The days of Gurley carrying an offense are probably over. His arthritic knee might keep him from a Hall of Fame career. His struggles last year weren’t completely his fault. The Rams went from the best run-blocking offensive line in 2018 to the 19th. Gurley still scored 14 touchdowns, including 12 rushing. Assuming he’s reasonably healthy, he can still be productive in an offense where he’s more of a complementary figure.

Von Miller, DE, Denver Broncos – Miller was the first high-profile NFL player, and second overall, to test positive for COVID-19. According to Miller, he experienced a loss of taste and smell and his lungs felt constricted. Miller considered opting out of 2020, but will attempt to regain his previous form. The former Super Bowl MVP endured the second-worst season of his career with only 8 sacks. While he made the Pro Bowl, he wasn’t the pass-rush terror that wrecked offenses.

Ty Hilton, WR, Indianapolis Colts –Hilton missed six games last year, including five with a calf injury. Hilton has also battled various other leg problems. The sudden retirement of Andrew Luck last fall didn’t help either. When healthy and with a good quarterback, Hilton is a game-breaker. He averages 15.6 yards per catch for his career. But last year, he set career lows in receptions (45) and yards (501). Perhaps Rivers will make a difference.

Mike McCarthy, Dallas Cowboys coach– Mike McCarthy was blessed to have two Hall of Fame quarterbacks in Brett Favre and Aaron Rodgers. He made one Super Bowl in 13 seasons. His offense got stale and reportedly didn’t get along with Rodgers. Now, McCarthy has a star-studded offense, led by Dak Preston, Ezekiel Elliott, Amari Cooper, and a defense with a revamped defensive line that added Everson Griffen and Aldon Smith. If the Cowboys don’t make the playoffs, McCarthy will be the one to blame.

Ten things that may happen…