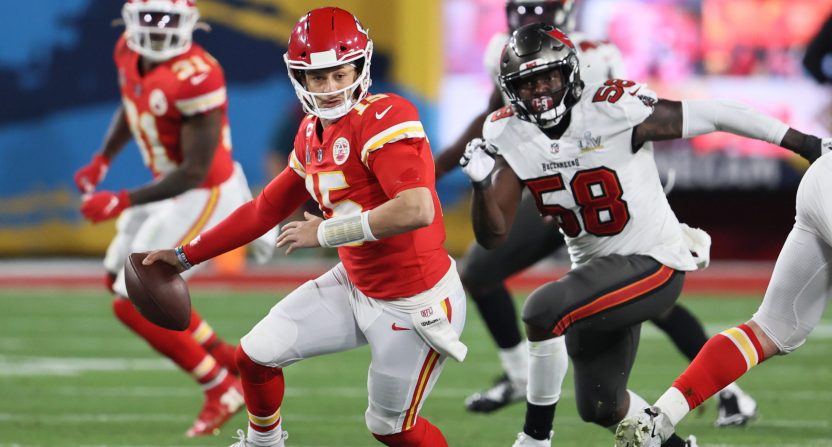 So, you’ve decided to watch the National Football League. Congratulations! Football is back. Fans are back. COVID-19 is back. Womp womp. Hold on to your butts.

The good news is that 93 percent of players are vaccinated – well above the national rate of 52.5. That’s laudable. However, shouldn’t it be closer to 100 percent? C’mon Lamar Jackson, Cam Newton, Kirk Cousins, Cole Beasley, and DeAndre Hopkins.

So weird. Professional athletes will do everything they can to get their bodies right. If horse tranquilizers could help them recover faster from injuries, they would probably stick a needle right into their eyeballs. And yet, they balk at a life-saving vaccine? Remember, it’s now a 17-game regular-season. Being unvaccinated could cause you to miss games and put your team and possibly your career in jeopardy.

We’re looking at you Minnesota Vikings, who entered August with the lowest vaccination rate in the league. At least the Atlanta Falcons are taking the pandemic seriously. They were the first team to have a 100 percent vaccination rate. Bravo. They deserve an automatic bid to the playoffs.

Is a Chiefs vs. Buccaneers Super Bowl rematch inevitable?

Both teams are arguably better.

Kansas City might have repeated as champion if not for a decimated offensive line. K.C. aggressively revamped the entire unit, adding two key new additions to protect Patrick Mahomes: Orlando Brown Jr. (trade with the Baltimore Ravens) and Joe Thuney (signed as a free agent). If the Chiefs can rank within the top five in pass protection, this offense will be unstoppable. The only other major question: can they find a third option at receiver to take pressure off Tyreek Hill and Travis Kelce?

Tampa Bay is the first Super Bowl winner in the salary cap era to return all its starters. Early last season, Tom Brady struggled at times connecting with his wide receivers. This season, he should be more in tune with what should be the best pass-catching group in the league. Good luck trying to slow Mike Evans, Chris Godwin, Antonio Brown, and Scotty Miller. Also don’t forget about Rob Gronkowski. What also sets Tampa apart is the fierce pass rush of Shaquil Barrett, Jason Pierre-Paul, and Ndamukong Suh.

The smart guys in the room: Urban Meyer and Kyle Shanahan?

Coaches have huge egos and no two did more this offseason to try and show they’re smarter than everyone else. The only reason Meyer took the Jaguars’ job was because they had the No. 1 overall pick, which he used on Trevor Lawrence. Shanahan traded up in the draft for the No. 3 overall pick so he could handpick Trey Lance. How both moves play out will tell us a lot about Meyer and Shanahan.

Meyer’s tenure is already off to a rocky start. First, he hired former Iowa strength coach Chris Doyle who then quickly resigned due to accusations of racism. Then Meyer brought in Tim Tebow to be a sideshow backup tight end. And most recently, he had Lawrence battle for the starting job and then traded away Gardner Minshew II after announcing Lawrence is QB1. That last move is particularly puzzling. Minshew was never going to start. Why take away valuable snaps from Lawrence?

Maybe Meyer knows something we don’t.

Shanahan is in a different situation. San Francisco is expected to contend now after an injury-ravished season. Did he give a glimpse of the future with a QB platoon in the preseason? Lance will probably start sooner than later, but Shanahan might need Jimmy Garoppolo to steer the shop until the rookie is ready. Lance has an intriguing skillset, but he played one game last year. He needs reps. Shanahan didn’t choose Justin Fields. He didn’t take Mac Jones. Was he right?

Maybe Shanahan knows something we don’t.

Odell Beckham Jr., WR, Cleveland Browns – Remember the Odell Beckham Jr. slant? One of the most unstoppable plays in football. Sadly, Beckham hasn’t been the impact player we expected for Cleveland (the rare good David Gettleman move.). He hasn’t made the Pro Bowl since 2016, and his receiving yards per game have dropped for three straight years. Plus, the Browns’ offense looked better after Beckham’s season-ending injury last year.

Ezekiel Elliott, RB, Dallas Cowboys – Dallas has gradually moved away from an Ezekiel Elliott-powered offense to a Dak Prescott-powered offense. The league has changed, and Prescott has improved. Meanwhile, we’re not even sure if Elliott is the best back in his own backfield. Tony Pollard is younger, more explosive. Elliott has been declining since his great rookie season. However, the Cowboys have so much talent at wide receiver. They just need Elliott to be a complementary piece. Perhaps being 10 pounds lighter will help .

Jadeveon Clowney, DE, Cleveland Browns – Jadeveon Clowney is an odd player. He pressures the quarterback and is good against the run. But his physical gifts have never translated into great statistics (32 sacks in 83 career games). Over the past few seasons, he’s had to settle for one-year deals; the latest with the Browns is worth up to $10 million. He made $15 million with the Titans in 2020. It’s also questionable if he’s an upgrade over Olivier Vernon, who had nine sacks but suffered an Achilles injury in January and is a free agent.

Carson Wentz, QB, Indianapolis Colts – There were a lot of reasons Carson Wentz was the worst quarterback in the league last year: no continuity on the offensive line, unreliable receivers, accumulating injuries, friction with Doug Pederson, etc. But in every possible statistical measurement, he was awful. He’ll try to resurrect his career with Frank Reich, who was his former offensive coordinator with the Eagles. Reich has the reputation of being a smart guy, but it seems like a reach to suggest that Wentz will be better than Philip Rivers was last year.

Patrick Peterson, CB, Minnesota Vikings – Patrick Peterson was one of the most feared cornerbacks in the league. He could shut down a No. 1 receiver and was a threat on special teams. As a rookie, he tied an NFL record by returning four punts for touchdowns. He’s now 31, ancient for a top-flight cornerback. But he can still be dependable. He has started every game he has played in since his 2011 rookie season and has missed only six games in his career.