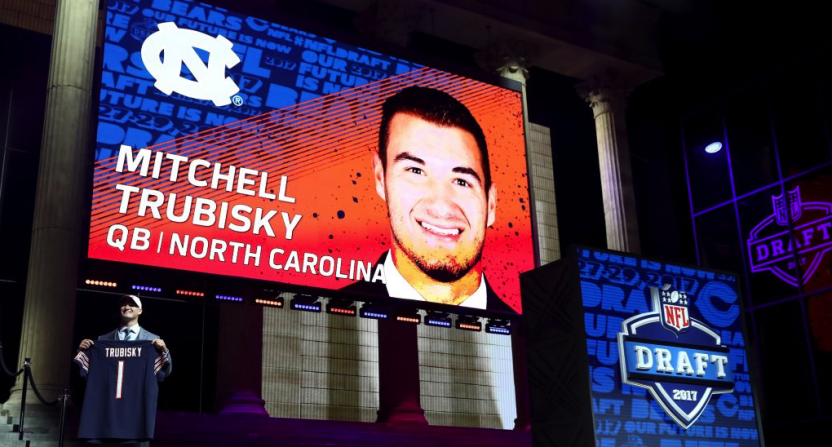 Every year leading up the NFL Draft, millions and billions of mock drafts are published by everyone from analysts who work for NFL Network to guys sitting in their basement in just their underwear and socks. (Sorry for that visual.) Okay, so maybe there are not actually millions of mock drafts put out each year, but that is just what it seems like.

There is a select group of people who cover the draft each year and who a majority of NFL fans turn to for their information on the incoming prospects. They do a great job of explaining all the strengths and weaknesses of each player, but predicting where each may land in the draft is where their jobs become a little tougher.

With the first night of the 2017 NFL Draft now concluded, we can now look back and see which draft analysts actually had the most accurate mock draft. In the battle for draft expert supremacy, who came out on top?

Mayock is supposedly one of the gurus who knows everything there is to know when it comes to the NFL Draft. Except for where the players will actually be drafted. He knows a ton of info and background on the majority of the prospects, but there may be a reason for why he only put out one mock draft this year.

Mayock’s colleague at NFL Network does a little better when it comes to projecting where players will land in the draft. Jeremiah’s seven correct selections were tied for the most by those featured in this examination.

However, his also featured a fair share of bumps in the road too. His mock draft had a total of five running backs going off the board in the first round (only two were selected), including Joe Mixon to the Green Bay Packers.

There are people who should be covering the NFL Draft, and then there is Pete Prisco. With those who are familiar with his work, he is known for his outrageous takes on players around the league and upcoming prospects as well. (He loved Christian Ponder in 2011.)

Towards the end of his mock draft for this year, it just seemed like he gave up trying to think as five of his last eight players were not even selected on night one of the 2017 draft.

The one thing with Schrager is that he has a pretty good idea of which players are first-round quality and which are not. His problem in his mock draft was just finding the correct slots for those players to land.

He had a couple odd choices like Christian McCaffery to the New York Jets, Deshaun Watson to the Buffalo Bills, and Corey Davis all the way to the Pittsburgh Steelers at pick number 30. But a majority of his picks were actually selected around the slots he chose for them.

Oh, here we go. Mel Kiper Jr., the guy who puts the Dr. in draft. Surely, his mock draft would be one of the best of the bunch, right?

Nope, not even close actually. He was the only one of this group to not have Myles Garrett go No. 1 overall to the Cleveland Browns. Instead, he thought the Browns would opt for quarterback Mitchell Trubisky.

Yeah, ESPN — Ed Werder was definitely the right guy to get rid of.

As good as Pro Football Focus is at accumulating advanced statistics, their draft predictions are a bit lacking. Instead of rolling with some of the obvious choices for teams, Palazzolo tried to think just a little too far outside the box this year.

With predictions including Christian McCaffrey to the New York Giants, Leonard Fournette to the Oakland Raiders, Dalvin Cook being the first running back off the board at number 17 to the Washington Redskins, and Derek Barnett to the Jacksonville Jaguars, this was clearly the worst mock draft of the bunch.

Maybe have someone else do a mock draft next year, Pro Football Focus?

A little unknown to the average NFL fan, but those who follow the draft closely are well aware of the type of high-quality work Easterling produces. This definitely shined through in his mock draft.

He did end up having seven players in his mock not get selected on day one this year, but he made up for those misses by tying with Daniel Jeremiah for the most correct selections in the group. Of everyone, Easterling may have had the best understanding of what teams were really looking for in the draft this year.

3 thoughts on “How well did the NFL’s best draft ‘experts’ do with their first-round mocks?”