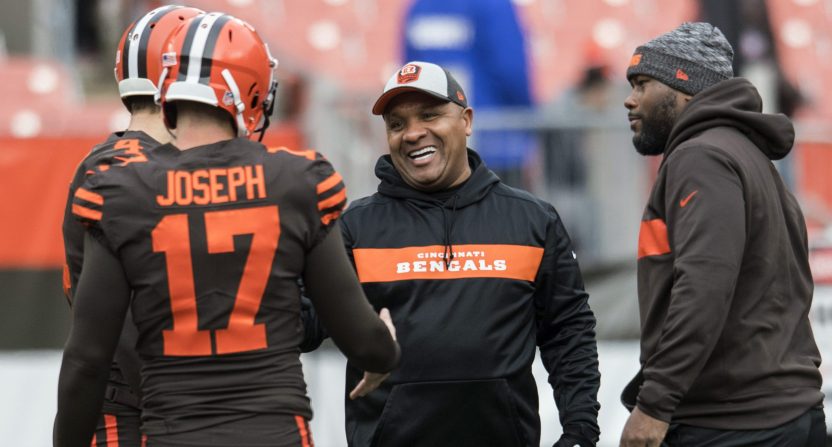 Tuesday, Brian Flores dropped a bombshell lawsuit on the NFL, alleging, amongst other things, that Miami Dolphins owner Stephen Ross offered him $100,000 every time he lost in 2019 in order to ensure a high draft spot.

Later that day, former Cleveland Browns coach and current Grambling coach Hue Jackson chimed in on Twitter to support Flores and back up what he was saying.

I stand with Brian Flores. I can back up every word i’m saying.

Specifically, Jackson also seemed to allege that Browns’ owner Jimmy Haslam “was happy while we kept losing” and then wrote “trust me it was a good number” in response to someone who said the owner wasn’t offering that kind of money.

Well Jimmy Haslam, was happy while we kept losing.

Trust me it was a good number!

Jackson’s tenure in Cleveland is considered one of the worst of any head coach in NFL history. After going 1-15 in his first season and 0-16 in his second season, Jackson was fired midway through his third season when the Browns were 2-5-1.

Since Flores’ suit was filed as a class-action lawsuit, someone like Jackson can join on as well. It would appear based on his Twitter comments that he may do that.

In the meantime, the fact that Jackson so candidly took to Twitter to share his thoughts and allegations had a lot of people around the NFL talking as well. Some took his allegations more seriously than others, given Jackson’s reputation with the Browns.

To laugh at and immediately dismiss this because it’s Hue Jackson is part of the problem. https://t.co/pFVprkPIrY

Now Hue Jackson is saying he was paid to lose games for the Browns.

The NFL – you’ve made your bed (with gambling interests) now lie in it.@nflcommish https://t.co/vzm3jwqWkq

Considering we've got Hue Jackson on record saying he has proof…. https://t.co/bn6Yc5K1a9

Hue didn’t get incentives to lose. If he did and kept it quiet all this time, knowing he was done in the NFL, that’s on Hue. He is trying to put his name on this as a martyr and its so on brand for Hue Jackson, it makes me laugh. Hue lost games because of coaching. #Browns