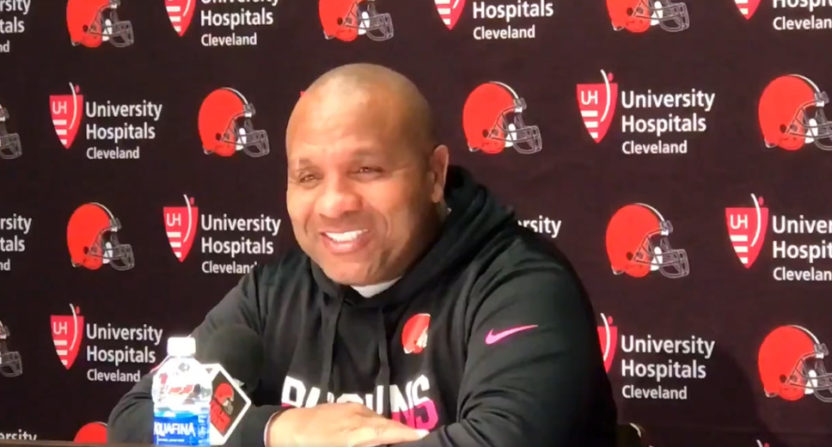 Cleveland Browns’ coach Hue Jackson promised at the end of their 1-15 2016 campaign (the worst record in team history) that things would get better, saying, “I’m not going 1-15. No. I’ll be swimming in that lake over there somewhere. That’s not happening. …We’re not going 1-15 next year. You can write it if you like.” Here’s the video of those comments:

But he never said anything about 0-16…. pic.twitter.com/qTmh6C2Gd2

Well, it did happen; the Browns are currently 0-15, with one final game left Sunday against the Pittsburgh Steelers, so the best they can do is 1-15. And Jackson said Wednesday he’ll keep his promise to jump in Lake Erie:

“I made a statement and I have to back it up.”

Hue Jackson confirms he will make good on his promise to jump in Lake Erie.

#Browns Hue Jackson said "Heck ya I've got to do it'' about jumping in the lake. Says he will do it for the Hue Jackson Foundation, hopes a lot of people come out for it.

Here’s video of Jackson talking about it:

“How? You just jump in. …I made a statement, I’ve got to back it up. …I have not thought out all that media stuff about how to. I think I got that part, just fall in, get out and dry off. …It will definitely be for my foundation, there’s no question about that. Heck yeah, I’ve got to do it.”

Jackson and his wife Michelle started the foundation this year, which has a mission of “empowering children, teen and adult survivors of Human Trafficking through the funding of organizations that champion for and serve as a voice for those who are exploited.” Here’s more on their cause.

And they’ve made tangible impacts, partnering with the Salvation Army of Greater Cleveland to create The Hue Jackson Survivors of Human Trafficking Residence, “a safe environment for victims to heal and focus on their treatment.” So Jackson’s jump into the chilly waters of Lake Erie (Cleveland’s weather forecast has a high of 12 degrees and a low of three Monday) will be for a good cause, at least.

But still, it’s remarkable that he set such a low bar with this promise, guaranteeing only “We’re not going 1-15” (which could still be true if they finish 0-16), and that the Browns couldn’t clear that. And plenty of Browns’ fans still weren’t impressed:

#Browns confirm Hue Jackson will keep his promise to jump in Lake Erie.

In other news, this is the first promise Hue Jackson has ever kept to fans.

The Browns and Hue Jackson are so shook about the damn 0-16 parade and what is said on social media, that Hue Jackson opens his press conference talking about jumping in the lake.

Yep – THAT’s the mark of a rock solid organization, people.

Hue Jackson jumping into Lake Erie is up there with the Rudd helmet toss, the Manziel money phone, and Weeden getting stuck under the American flag. Stop looking at the Browns as a tragedy, they are the greatest comedy in sports. https://t.co/4zwLZt1A5C

If Jackson manages to hang on to his job after this season, we’ll see if he makes further bold predictions for next year.