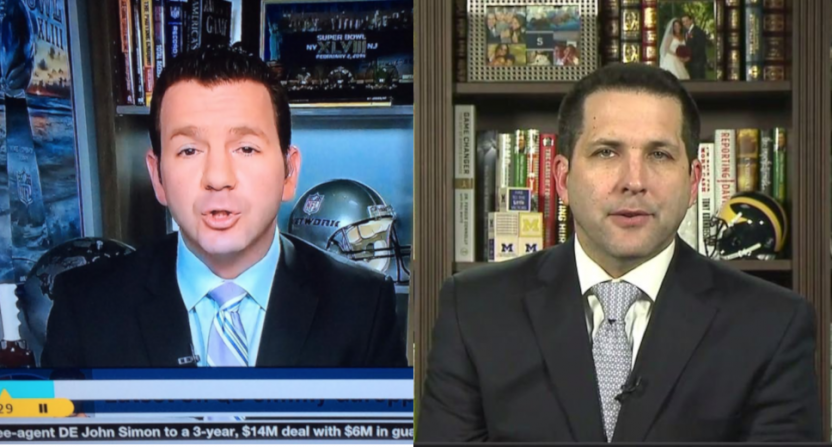 It’s obvious that information flows from NFL executives, coaches, players and agents to reporters like ESPN’s Adam Schefter and NFL Network’s Ian Rapoport; that’s necessary for them to break stories and transactions before they’re officially announced. Why those sources decide to provide said information to reporters is less immediately obvious, and the reasons for it can vary depending on what information it is, but part of that conversation is about the sources getting information from the reporters themselves. That can be especially interesting around the NFL draft, where teams are trying to figure out what players other teams are targeting, and Rapoport and Schefter both candidly spoke to Jenny Vrentas of SI’s The MMQB (as part of a wider piece about how teams gather information ahead of the draft) about what that’s sometimes meant for them:

“That’s what it’s like this time of year,” Rapoport says. “Everyone wants you to know they are not interested in what they actually are, and everyone is wondering, ‘If we want to make this move, how actually feasible is it?’ ”

“In my world, and for people who do my job, we are trying to track down GMs all the time, and a lot of times, especially when they are doing a deal, they avoid us,” Rapoport says. “In draft week, it’s the opposite.”

Schefter cites two drafts in which a team was texting him during the first round, in something of a panic, because there was a run on the position they were looking to draft: offensive tackles in 2008 and pass rushers in ’12. They wanted to know if he thought the player they liked would still be there when they picked. “If people ask, you give your informed opinion, but ultimately, you never fully know,” he says. Both teams, by the way, got their guy. “And I felt great relief,” Schefter adds.

There are a lot of other interesting anecdotes in there, including one GM asking Rapoport to relay a “I’m not going to draft [a specific first-round prospect]” message to another GM (the second GM responded with “Why don’t you tell [the first GM] that he’s full of sh– and I don’t believe him” and moved up to draft the prospect ahead of the first GM’s pick anyway) and a discussion of how extensively teams read various mock drafts. And the talk about recently-retired Dallas Morning News columnist Rick Gosselin’s long-running mock draft (based on information he gathered from team sources) is particularly interesting; Vrentas writes that his two rules were “He’d share his information, reading off his full page of comments from around the league on each of hundreds of prospects, as long as you’d share with him in return; and he’d never disclose, even to others in the league, to whom he had been talking.”

But it wasn’t just Gosselin’s mock drafts that teams were reading, as one GM talks in that piece about how they track all sorts of mock drafts through the fall and winter. And Daniel Jeremiah (the former scout now working for NFL Network) discusses how one team he worked for thought their scouts leaked something when a player they liked showed up connected to them in a mock draft. That all goes to show just how much attention teams are paying to draft coverage in the media, whether that’s mock drafts or reporters from insiders. That’s fascinating to know, and that illustrates one particular challenge for anyone doing any sort of draft coverage based on team sources; how do they know what’s a real comment and what’s something the team just wants the source to put out there?

Sourced draft coverage is a particularly unusual element of sports media coverage, as it involves some competing incentives. The reporters are incentivized to get the most accurate information possible, but their sources aren’t always incentivized to provide that; a clear strong outcome for them is other teams misunderstanding who their team really wants, and thus panicking to trade up with them. However, those sources can’t always outright lie; if the reporter gets wind they’re being played, they might not run the comments, or might stop talking with the source and sharing the other information they’ve gathered with them. (And that information has value too, as Vrentas’ piece illustrates.) And even if draft misinformation goes off as planned, with it being reported as fact and fooling another team, the reporter could still see they were played when the draft happens and either burn the source publicly or just decline to talk with them in future.

Overall, draft coverage using team sources presents some clear hurdles for reporters and for readers. When those sources are given anonymity, the credibility transfers from the source to the reporter and their outlet; as readers don’t know who the source in question is, they’re putting their faith in the track record of the reporter and the outlet, and in their ability to evaluate and relay truthful comments rather than smokescreens. There are plenty of benefits to potential smokescreens, and so the reporters in question have to be on the lookout for those.

And beyond smokescreens, there are debates about if reporters and analysts should relay information that may or may not be sincerely believed by the source, but that doesn’t add much value to the conversation. There’s a case that the world would be better off without the likes of “Eli Apple can’t cook,” “Skal Labissiere is a fraud,” and “Kyler Murray wasn’t trained for combine interviews.” And maybe that’s particularly where that role of media members as gatekeepers between anonymous team sources and the public could stand to be beefed up; “our team likes” or “our team doesn’t like” comments on a certain player provide some potential value, but printing bizarre comments criticizing players for something that’s at best minimally-relevant to their career doesn’t seem helpful. And it often doesn’t seem to really translate to negatives for the players in the end; Apple and Labissiere were both first-round draft picks, Murray could be the first overall pick, and Kelechi Osemele, the subject of the infamous “He was raised by women, which bothers me” anonymous scout take, was a second-round pick who’s entering his ninth NFL season.

At any rate, Vrentas’ piece is an interesting look at just how NFL teams gather information from the media, and how avidly they’re following media reports. And it indicates that some reporters at least are thinking about the idea of teams trying to spread misinformation through the media, and that’s a positive sign for readers; if the reporters think critically about what they pass on, then readers are more likely to wind up with actual news rather than just what teams are trying to get out there. And maybe one day that will lead to the printing of less patently ridiculous comments from anonymous scouts.