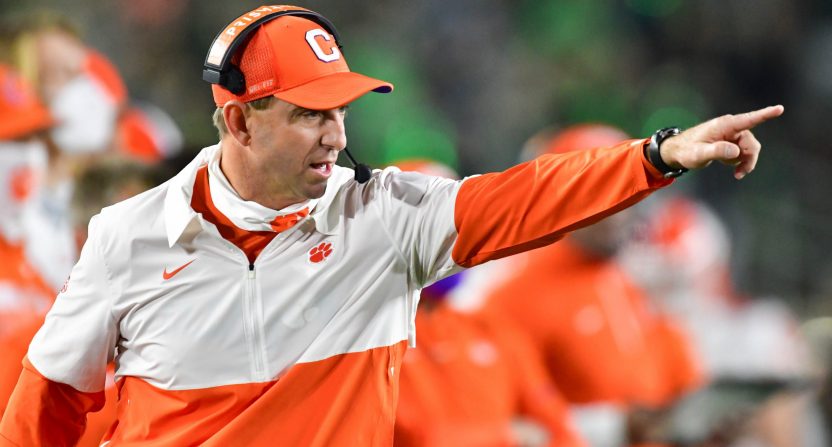 Why would Dabo Swinney ever leave Clemson?

Fair question. There are plenty of reasons to stay. He has built a program that is the envy of college football, outside of Alabama. He’s among the highest-paid in his profession.

Remember when “Clemsoning” was a thing? Once upon a time, we mocked the Tigers for routinely coming up short year after year. That doesn’t happen anymore. Swinney changed the narrative by winning a pair of national championships. He has a shot at another this season.

As long as the 5-star recruits keep rolling in, Swinney will be in the title game hunt. But coaches are hyper-competitive. They love new challenges.

Some owner is going to offer Swinney an NFL gig. If Swinney’s 100% happy with his current situation, then perhaps he’s a college lifer. But if he wants to make the jump, now’s probably the ideal time. The possibilities might never get better.

Swinney has been at Clemson since 2003, when he started out as a wide receivers coach. He has been in charge since 2008, ascending from interim status when Tommy Bowden reigned under pressure after starting that season 3-3. Swinney molded the Tigers into the juggernaut that exists today. But this is his 13th season as head coach. That’s a long time to be at one place in college athletics.

Swinney turned 51 years old last month. Judging from recent history, most college-to-pro hires are in their mid-to-late 40s. Matt Rhule was 44 when he left Baylor last winter for the Carolina Panthers. Jim Harbaugh was 47 when he left Stanford for the San Francisco 49ers. Chip Kelly was 49 when he left Oregon for the Philadelphia Eagles.

What’s it going to take to get Swinney to leave? Cash, and lots of it. Considering his present salary, an NFL owner will need to cough up at least $10 million per season. That would be the most money ever given to a college guy, and he would immediately become among the top three highest-paid coaches in the NFL.

And Swinney knows success in the pros is no sure thing. In college, you can simply out-recruit the competition for talent and out-spend the competition for facilities and staff. In the NFL, you’re limited by the draft, the salary cap, and free agency.

College coaches don’t have the best track record, because the job is harder. Nick Saban (who won a national title at LSU) went 15-17 with the Miami Dolphins before returning to college at Alabama. Saban failed. So did Kelly, Steve Spurrier, Bobby Petrino, and Mike Riley. The two in recent memory who did well are Pete Carroll (who won a Super Bowl with the Seahawks) and Harbaugh (who got the 49ers to the Super Bowl).

There are at least four teams that probably will take a serious look at Swinney: the Houston Texans, the New York Jets, the Jacksonville Jaguars, and the Atlanta Falcons. The Texans, Jets, and Jaguars could offer Swinney a chance to coach a quarterback he already knows.

Texans quarterback Deshaun Watson is responsible for Swinney’s first national championship at Clemson in 2016. And current Clemson junior quarterback Trevor Lawrence, who led the Tigers to the 2018 title, is the presumptive No. 1 overall pick for the 2021 NFL Draft. The Jets (0-11) are in line for that top overall selection, with the Jaguars (1-10) a close second. This, of course, assumes that Lawrence doesn’t return for his senior year.

If Swinney does go to the Texans, Jets or Jaguars, he’ll have something that no other college coach has ever enjoyed entering the NFL- his own guy at quarterback. That would be tremendously appealing.

The Texans (4-7) are 4-3 since firing Bill O’Brien. Watson is playing his best football; he’s third in the league in passer rating (112.5), which would be the highest of his career. In NFL history, his career rating of 103.6 is second-best, trailing only Patrick Mahomes (110.7). Swinney himself once compared Watson to Michael Jordan. That was before the 2017 draft. Some people dismissed this as a coach hyping up his own player. Turns out Swinney wasn’t completely off-base.

But Houston is a mess. Former coach Bill O’Brien mismanaged the roster, including dealing away Watson’s favorite target in DeAndre Hopkins. O’Brien traded away Houston’s 2021 first and second-round picks to the Dolphins to acquire left tackle Laremy Tunsil and wide receiver Kenny Stills, who was cut last week. And Houston will be $13.7 million over the cap in 2021.

If Lawrence is the best NFL quarterback prospect since Andrew Luck (No. 1 overall pick in 2012), that would be hard for Swinney to turn down.

Of course, the Jets and Jaguars are not great jobs. The Jets have been a laughingstock for quite some time. The Jaguars, who were a game away from the Super Bowl three years ago, have imploded. Ownership for both teams will have to prove that they’re committed to winning.

So, what will Swinney do? Probably stay in college. But if the NFL calls, now is probably the right time for him to go.