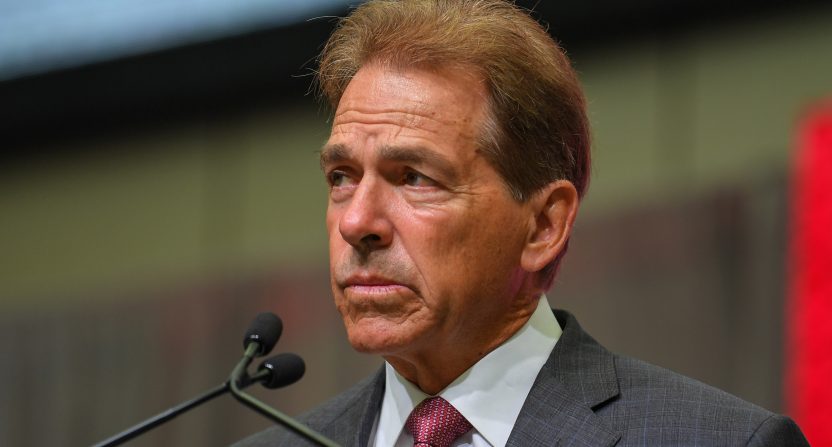 The NFL Draft should be the happiest moment in a football player’s life but the actual process that a prospect goes through to get drafted sometimes isn’t that great. Depending on who you are, it seems like everyone is against you while interview questions at the Scouting Combine can range from strange and non-sensical to being inappropriate and illegal to ask in a job interview. Wonderlic scores, which are borderline meaningless, inevitably get leaked. Even a team who actually wants you might anonymously trash you in the media and make you look worse in hopes of other teams passing and you falling lower in the draft order.

The whole thing isn’t as rosy as the NFL makes it out to be. Sure, many people’s dreams will come true this weekend and they’ll play pro football but discovering the behind the scenes process is like learning how sausage is made.

One person who has really done a great job going to bat for his former college players has been University of Alabama head coach Nick Saban. Saban isn’t the only college coach talking up his former players but Saban has been one of the most vocal and has been most vocal on a couple high profile players who have a lot of injury questions in the lead-up to the NFL Draft.

Tua Tagovailoa and Jerry Jeudy are expected to be taken in the top half of the first round but past injuries have created doubt on their pro chances. Saban has been out and about to ease any fears.

In talking about Tagovailoa, his situation reminded Saban about when he was head coach of the Dolphins and passed on Drew Brees in free agency. Saban noted that the Dolphins failed Brees on their physical, due to a torn labrum and rotator cuff, and instead traded for Daunte Culpepper. Miami’s loss was New Orleans’ gain as Brees became the career passing yard and touchdown leader with a Super Bowl title.

Saban noted to the Wall Street Journal, “The sky’s the limit (with Tagovailoa). I don’t think any of the questions with Tua have to do with his ability to throw the ball and be effective.” Tagovailoa has had a bunch of injuries, the most serious being a fractured hip but his surgeon noted that Tagovailoa “isn’t susceptible” to re-injure his hip and the Tennessee Titans’ team physician, a hip surgeon, echoed similarly positive thoughts after examining him. So if that’s the case, Tagovailoa should work out with whatever team who drafts him.

Jeudy had a torn meniscus in 2018, which has concerned some teams but Jeudy’s physician reportedly sent a letter to teams saying Jeudy had no “subsequent issue, symptoms or limitations.” Saban was equally emphatic about Jeudy’s knee telling SiriusXM NFL Radio, “Well, first of all, Jerry Jeudy has nothing wrong with him. Absolutely nothing. He never missed practice here. He played in every game. Played in a bowl game when he didn’t have to play. Practiced every day for the bowl game. So that’s completely false.”

Some people will point out that Nick Saban would defend Tagovailoa and Jeudy and want them drafted regardless of their medical condition and that’s a fair point. At the same time, Saban is well-respected within the football community so if Saban knew that there were legit injury risks with either of these players, I don’t think he would lie and risk his reputation to get them drafted high. I don’t think Saban would go out and say a team shouldn’t draft them but I would imagine if he felt there was a concern, Saban wouldn’t say anything.

It might seem minor but in a situation where it seems like everybody is against a prospect, it’s great to see somebody in their corner. There’s no doubt Tua Tagovailoa and Jerry Jeudy will be drafted tonight but Nick Saban’s endorsement should ease fears and help them from falling lower in the draft.