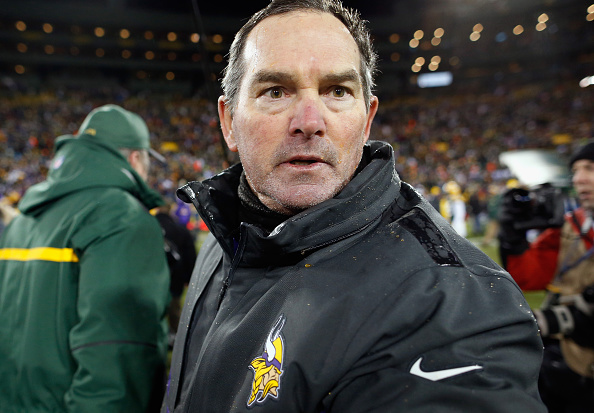 More often than not, organizations who have to hire a new head coach get it wrong. Like, completely wrong. Cleveland’s Jimmy Haslam hiring of coach Mike Pettine comes to mind. Or the 49ers getting rid of Jim Harbaugh so they could hire Jim Tomsula so they could fire him a year later. Or the Eagles with Chip Kelly. Or the Dolphins with Joe Philbin. On this Black Monday of 2016, a couple more examples are sure to be shown.

But you know who got it right? The Vikings who hired Mike Zimmer before the 2014 season and watched him take a team that finished 5-10-1 in 2013 and lead it to an 11-5 record and the NFC North Division title in 2015. Yes, Bill O’Brien and Jay Gruden, both first-time NFL head coaches, qualified Houston and Washington, respectively, to the playoffs in their second seasons as well, but both divisions were incredibly weak and neither squad recorded more than nine wins.

Both of their resumes pale in comparison to what Zimmer and the Vikings, who outlasted the Packers 20-13 on Sunday night to win their first division title since 2009, has accomplished. In the process, Minnesota gets to host a first-round playoff game vs. the Seahawks instead of returning to Lambeau Field to face Green Bay in the first round (that would have occurred if the Packers beat Minnesota on Sunday night).

“I want them to understand that it’s not OK to lose,” Zimmer said in October 2014 after Minnesota lost 17-3 to the Lions, which had followed a 42-10 defeat to the Packers. “We have to change the mentality, the mindset of this. I can remember telling defenses in Cincinnati a long, long time ago, that we have to develop this mindset that it’s not OK to lose. It’s not business as usual. I’m not very accepting of these kinds of things.”

Since uttering those words, the Vikings are 16-10.

For Minnesota, it’s been about showcasing its toughness on the field while sprinkling positivity throughout the rest of the players’ waking hours.

“The head coach’s steady hand has pushed almost all the right buttons since taking over, establishing himself as a coach who commands respect and gets respect but also who gives respect to his players in a genuine way. He has cultivated what looks to be — at least from a distance — a near-perfect team-coach relationship,” wrote the Minneapolis Star Tribune a few days ago.

And he’s helped those players to perform admirably.

Running back Adrian Peterson, after missing most of last year due to a suspension, had a renaissance season at the age of 30, finishing first in the league with 1,485 rushing yards. Second-year quarterback Teddy Bridgewater improved his completion percentage, threw for more passing yards, bettered his touchdown-to-interception ratio and increased his quarterback rating this season.

Yet, Zimmer also must contend with Bridgewater when he performs stunts like …

Mike Zimmer is a defensive coach, which helped his team win the NFC North title game with almost no offense. Teddy: 99 passing yards.

It’s been the Vikings defense that has truly stood out this season. Minnesota allowed just 19.3 points per game, which ranks fifth in the league and is quite an improvement from 2014 (11th in the league) and 2013 (31st in the league). On Sunday, when Minnesota’s offense was less than impressive, the defense sent the team into the postseason on a high note. First, the Vikings intercepted Aaron Rodgers in the end zone with 2:09 to play as the Packers tried to tie the game, and then they batted down his last-second Hail Mary attempt (something the Lions couldn’t manage a month ago) to win the division title the Vikings have fantasized about all season.

“It’s huge,” said defensive end Everson Griffen, who recorded six tackles while sacking Rodgers twice and forcing a fumble that Captain Munnerlyn returned for a 55-yard touchdown in the third quarter. “We talked about this from Day 1 at training camp. All of our dreams came true.”

But the sun has not yet risen for Minnesota. Zimmer made sure to remind his team of that after the game. Still soaked from his postgame Gatorade bath and wiping the excess moisture off his face, Zimmer addressed his team by declaring, “We got a lot of heart. Come to Lambeau, defeat the champions to become the champions. … [But] there’s a much bigger prize out there, fellas. A much bigger prize out there. You’ve earned it.”

So has Zimmer. And so have those who decided Zimmer, at the age of 57 and who had been passed over for a number of head coaching jobs before, was a good risk. The Vikings probably aren’t good enough to win a Super Bowl this year. But don’t be surprised if that happens sooner rather than later under a coach who has transformed the Vikings culture and turned them back into a winner.