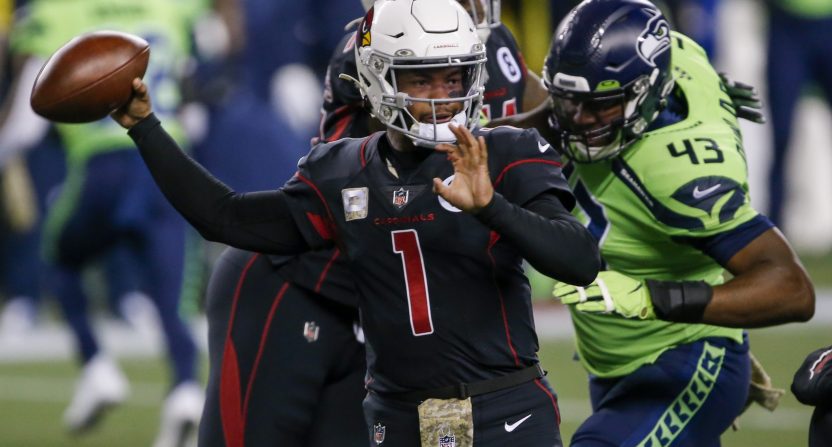 There might not be an elite team in the NFC. That should make for an exciting postseason. Here are six that could make a run at the Super Bowl, with a little luck:

Why they can reach the Super Bowl: When healthy, New Orleans might have the best roster. The Saints are the highest-rated team by Football Outsiders, ranked fifth in offense, third in defense, and fifth in special teams. They’re the only team in the league ranked among the top five in all three categories. Plus, they have played the fourth-toughest schedule. Few teams can match the big three of Drew Brees, Alvin Kamara, and Michael Thomas. Kamara is second in the NFL in yards from scrimmage with 1,179, and leads all running backs in receiving yards (648). On defense, the Saints have allowed the third-fewest total yards (302.2).

Why they can’t reach the Super Bowl: We don’t know what Brees will look like when he returns from his injury (ribs). Brees has a recent tendency to wear down late in the season, and his lack of arm strength means he can’t get the ball downfield consistently. Sean Payton has camouflaged Brees’ limitations with a short-passing game. Brees’ air yards per attempt is the second-lowest in the league. Also, some of the Saints biggest stars (Cameron Jordan, Marshon Lattimore, and Thomas) haven’t had great years.

Why they can reach the Super Bowl: Tampa Bay, which has played the league’s second-toughest schedule, doesn’t have glaring weaknesses. The skill position talent at wide receiver is impressive with Mike Evans, Chris Godwin, Antonio Brown, and Scotty Miller. They have helped 43-year-old Tom Brady lead the NFL in attempts (433) and completions (280). Brady could finish with his best year since his MVP season of 2017. The defense has been stout, particularly against the run, allowing a league-low 73 yards per game.

Why they can’t reach the Super Bowl: Has age finally caught up with Brady? He was brutal in Monday night’s 27-24 home loss to the Rams. According to Next Gen Stats, over the past four games Brady is 0-for-19 on deep passes (20+ air yards).

Brady and Evans have not been in sync. Evans leads the team in catches (45) and receiving yards (563), but is on pace for career lows in catches and yards. Evans was more productive with inferior quarterbacks in Jameis Winston and Ryan Fitzpatrick.

Why they can reach the Super Bowl: Aaron Rodgers. No player – other than Patrick Mahomes – can overcome the mistakes of his team like Rodgers. Third-and-long caused by a penalty, a bad playcall, or poor execution? Rodgers can still get you a first down. The MVP candidate leads the NFL in passer rating (115.8), which would be the second-highest of his career. Second only to his 2011 MVP season. Rodgers excels despite having one reliable wide receiver in Davante Adams, who’s enjoying a career year. Defensively, Jaire Alexander is a top cornerback.

Why they can’t reach the Super Bowl: Where’s the pass rush? Green Bay has pressured the quarterback on only 18.5 percent of dropbacks – fourth worst in the league. Defensive end Za’Darius Smith has eight sacks, but no one else has more than 2.5. The biggest drop-off has come from end Preston Smith, who has 1.5 sacks after getting 12 last year. If you can’t get to the opposing passer, it’s difficult to win games. In the Packers’ losses to Tampa Bay, Minnesota, and Indianapolis, they totaled two sacks.

Why they can reach the Super Bowl: #LetRussCook. Why not? The Seahawks have a feared passing attack. Russell Wilson pilots the second-highest scoring offense (31.8). Hiss ability to extend plays has always been lethal. But now Wilson has the best wide receiver duo he’s ever had. DK Metcalf is a physical marvel we probably haven’t seen since peak Calvin Johnson. Metcalf is sixth in the league in receiving yards (862), and is tied for fourth in touchdown catches (9). Seattle’s Tyler Lockett is sixth in touchdown catches (8).

Russell Wilson with the bomb to D.K. Metcalf, who fights off Stephon Gilmore for the Seahawks touchdown. pic.twitter.com/fdS3YrREOo

Why they can’t reach the Super Bowl: The days of the Legion of Boom are long gone. In 2012, New Orleans surrendered an NFL-record 7,042 yards. The Seahawks could break that mark. They’re allowing a 434.9 yards per game, which would total to 6,958. The 2012 Saints finished 7-9. Seattle probably will make the playoffs, but a quick exit wouldn’t surprise anybody. The addition of All-Pro safety Jamal Adams hasn’t been impactful enough, and the downside of his freelancing has been noticeable.

Why they can reach the Super Bowl: The Rams have the best offensive line in football. They rank third in run-blocking and second in adjusted sack rate. This is critically important for Sean McVay’s offense, because it relies heavily on play action. L.A. is ninth in the league in rushing (124.5 yards per game), and that running game sets up everything else. The biggest surprise, however, has been on defense. The Rams have allowed the second-fewest points in the league (19.2) and the fewest yards (291.9). They’re getting their money’s worth out of highly-paid defensive players Aaron Donald and Jalen Ramsey.

Why they can’t reach the Super Bowl: Jared Goff probably will never shake the label of being a system quarterback. Goff can play exceptionally well when everything’s working right. But struggles when conditions aren’t optimal. And now offensive lineman Andrew Whitworth is out with a knee injury. The loss of a starting left tackle injuries can disrupt an entire offense. Whatever metric you want to use (passer rating, QBR, DVOA), Goff has been average at best.

Why they can reach the Super Bowl: The Kyler Murray to DeAndre Hopkins connection is exciting. The off-season trade for Hopkins has helped Murray jump from No. 21 in passer rating in 2019 to No. 13. Murray and Hopkins combined for the play of the year. A great scramble and throw ended with a sensational catch for the game-winning Hail Mary to beat Buffalo. Murray also can beat teams with his legs. He has a chance to become the first quarterback to pass for 4,000 yards and rush for 1,000.

Why they can’t reach the Super Bowl: Shouldn’t Arizona be better? Kliff Kingsbury’s playcalling has been too conservative. In the 34-31 loss to Miami, he gave the ball to running back Chase Edmonds on a fourth-and-one instead of letting Murray go for it. And instead of going for it on fourth-down and short, he let kicker Zane Gonzalez attempt a 49-yarder that missed. Kingsbury acknowledged his choices were poor. Those choices will get you beat in the playoffs.