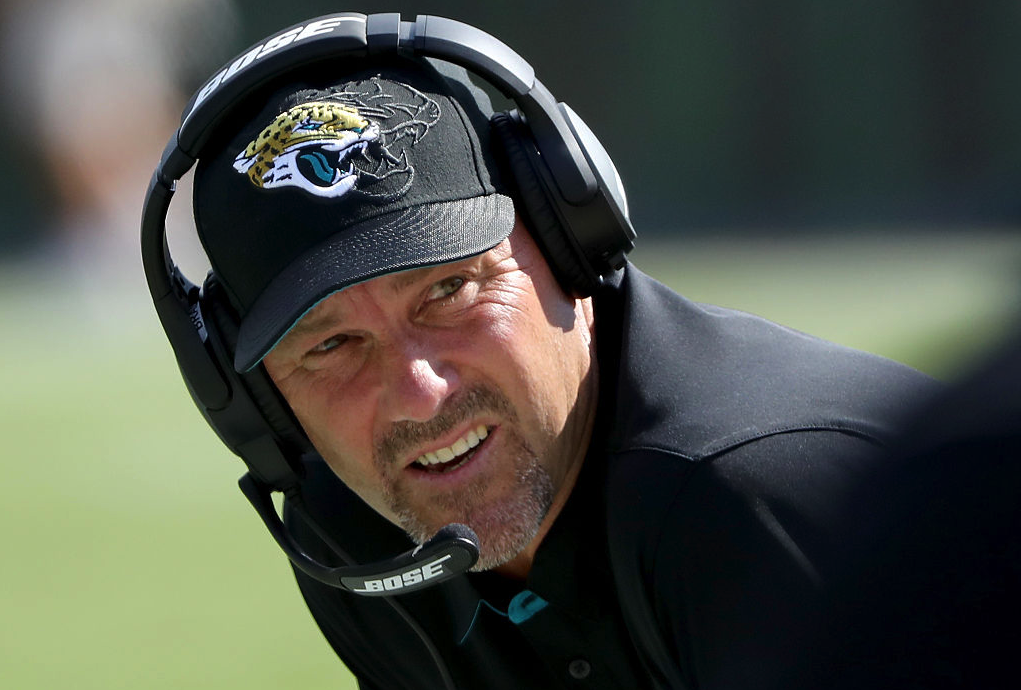 Gus Bradley’s Jacksonville Jaguars were a trendy playoff pick for many this season, and on paper, why not? The team spent a lot of money in free agency to shore up their defense, had a very good draft which included Jalen Ramsey and Myles Jack, and they have a young QB and young receivers seemingly on the rise. Everything looked primed for the team’s first playoff trip since 2007. But…

After three games, the Jags are 0-3, and many are calling for Bradley’s head. All of the promise from before the season has evaporated and only anger remains for fans of a team starved for success. After another head-scratching loss in a game they probably should have won (a 19-17 defeat to the Baltimore Ravens), the calls are getting louder and louder, and not just from Jaguars fans.

In today’s NFL, many wonder why owners are so quick to pull the trigger on making head coaching changes, yet Bradley has somehow kept his job despite owning a 12-39 record. And when the Jaguars look no better than they did three years ago with a much better roster now, it’s time to start questioning the coaching.

Lot of chatter about first-down play-calling after three takeaways.

Hurns agreed it was "too conservative."

In the fourth quarter with the Jaguars leading by one, they started two drives in Baltimore territory off of turnovers. Both drives ended in three-and-outs with no points scored. The incredibly conservative play-calling doomed this team from winning a game that they should have been able to put to bed. At the end of the second half, defensive end Dante Fowler took a stupid penalty on a third down that extended the Ravens’ drive, and then took a 15-yard leverage penalty on a 57-yard field goal that Justin Tucker missed, allowing the Ravens to get three free points right before halftime.

At a point, these mental mistakes and play-calling errors come down to coaching, not talent, and these are errors that this coaching staff has made repeatedly in their three previous seasons in Jacksonville.

Blake Bortles, who had grown as a passer last season, looks to have regressed dramatically in the first three games of this season. He’s making head-scratching decisions far too often, his throwing motion looks off and he doesn’t seem to trust his instincts nor his offensive line. He’s not being helped by an incredibly anemic rushing game that looks impotent even with Chris Ivory back from injury. And with the same issues carrying over from one week to the next, the coaching staff doesn’t look capable of fixing those issues.

"If I knew what we were doing wrong we wouldn't be doing it."
–Jaguars QB Blake Bortles

That’s not the quote from a QB who is confident in his coaching staff.

Players openly questioning the coaches is not a sign of a healthy and united locker room, and also shows there’s a lack of trust between the players and coaching staff. These are not issues that can be fixed in a week. In the first season of the Bradley regime, these mistakes were expected because of an overall talent deficit on the roster. That season, the Jaguars finished 4-12 and even won three games in a row.

In 2016, year one mistakes shouldn’t be coming back again and again and, in this instance, from far better players. There are Super Bowl Champions and college stars on this roster that are performing way below their level on a consistent basis, and it shouldn’t continue to happen. A pass rush featuring Malik Jackson, Dante Fowler and Yannick Ngakoue shouldn’t be generating the same amount of QB pressure (read, next to none) as the unit last year did without any of them. Blake Bortles shouldn’t be making basic rookie mistakes in his third season as a NFL QB.

Gus Bradley making it to 12-39 is a miracle in of itself in the modern NFL, where head coaches get hired and fired seemingly on a whim. Owner Shad Khan has done many wonderful things to legitimize the Jaguars off the field, but he’s absolutely failed to do that on the field. This is an opportunity for him to do that.

Next week, the Jaguars head to London to play the Colts. If they return at 0-4 heading into their bye week, Gus Bradley should not be the coach when the Jaguars travel to Chicago in Week 6. This is a franchise that hasn’t had a winning season or playoff appearance since 2007. Only the Bills, Raiders, Browns and Rams have a longer streak than that, and it’s plausible that the Raiders streak ends this year. Only three teams since 1990 have started 0-3 and made the playoffs, and these Jaguars certainly don’t look capable of becoming the fourth.

Shad Khan giving his first head coaching hire his due time is admirable. But Gus Bradley’s time has passed. Even a win next week might not be good enough to save Bradley, but if his team comes home at 0-4, his time should be well and truly up.