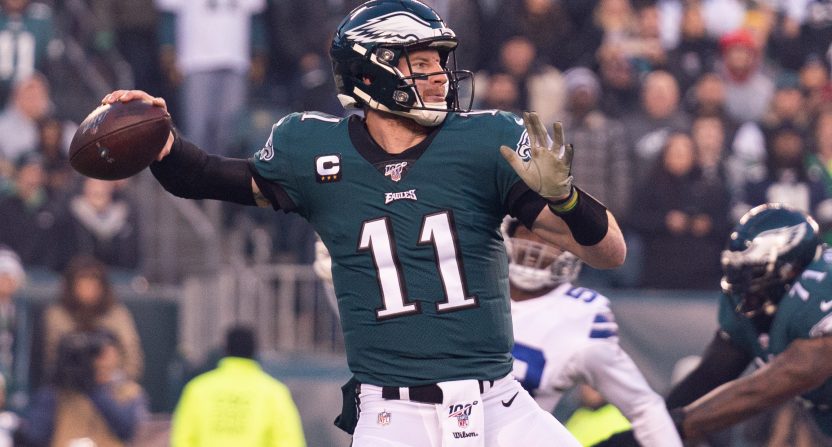 In the NFC East, somebody’s gotta win the division. And each week, it appears that nobody wants to win it but someone has to. So in the battle between the two teams still eligible to win the division, it was the Philadelphia Eagles prevailing over the Dallas Cowboys 17-9.

It wasn’t the greatest game by any stretch by either team, but the Eagles were more solid and showed more grit and determination when they needed to. With a large injury list (that grew in this game), the Eagles worked together to get the victory while the Cowboys just dropped passes all game.

Both teams were trying to find their footing but the Eagles scored a field goal on their first drive. And then after a Cowboys three-and-out, the Eagles marched down the field as Dallas Goedert scored the short-yardage touchdown.

After that, things got stagnant for both teams. The Cowboys kicked a couple field goals to shrink the margin to four but the Eagles suffered a turnover on downs and a missed field goal and failed to score more points in the first half.

The Cowboys got the ball in the second half and things seemed to turnaround. They were heading down the field and got in field goal range but a lost fumble by Tony Pollard just completely deflated Dallas.

The Cowboys suffered a bunch of unforced errors throughout the game. On top of the Eagles shutting down Ezekiel Elliott and limiting him to only 47 rushing yards, Dak Prescott was somewhat inaccurate in his passes thanks to his shoulder injury and receivers dropped six passes. In the end, it just wasn’t good enough.

On the other end, the Eagles were depleted at receiver but they impressed. Zach Ertz was temporarily taken out for a rib injury but he came back in to catch four balls for 28 yards. It may not look much in the stat sheet but his drive to get back on the field really propelled the team as Goedert took the bulk of the yards.

Miles Sanders scores to put the @Eagles up 17-6! #FlyEaglesFly

A Miles Sanders TD at the end of the third quarter made it 17-6 and all the Cowboys could do was kick a field goal to make it an eight point game.

The Eagles have the advantage in the NFC East but they haven’t clinched the division. An Eagles loss to the Giants and a Cowboys win against the Redskins in Week 17 will give the Cowboys the division based on a better division record. It may be a battle to be 8-8 or 9-7 but the NFC East division race is coming down to the wire and make for an exciting Week 17 finish.