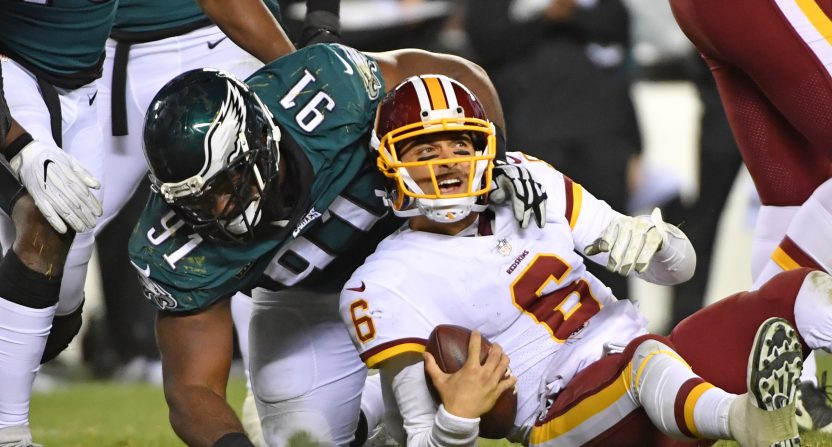 The Washington Redskins were one of the NFL’s surprises for much of the season, taking a 6-3 record into Week 11.

Then starting quarterback Alex Smith suffered a gruesome leg injury in the team’s game against the Houston Texans, ending his season.

Colt McCoy replaced Smith as the Washington quarterback… and had his season end with a fractured fibula suffered in a 28-13 loss to the Philadelphia Eagles on Monday night.

It’s really hard to be competitive in the NFL with a No. 2 quarterback. And it’s extremely difficult to win games (or even *a* game) with a No. 3 quarterback.

For Washington, that No. 3 quarterback is Mark Sanchez. Mr. Butt Fumble is now atop the Redskins’ depth chart at quarterback.

Sanchez, 32, hadn’t attempted an NFL pass since 2016 (when he only attempted 18 passes) with the Dallas Cowboys. The journeyman entered Monday night’s game with 86 career touchdown passes, 86 interceptions, and a 73.9 passer rating.

In 2o17, the Chicago Bears basically just had Sanchez around to be a mentor/coach for then-rookie Mitch Trubisky.

Now, Sanchez has to be the *starting* quarterback for a team that still has playoff aspirations.

Obviously those playoff chances would appear to be quite a longshot with Sanchez. He looked about as you’d expect on Monday night, which is, you know- bad.

Sanchez completed 13-of-21 passes for for 100 yards, zero touchdowns, one interception, and a 53.7 passer rating.

The Redskins are now 6-6, one game behind the Dallas Cowboys in the NFC East (the Eagles are also 6-6). The record also has them very much alive in the Wild Card race; the Vikings currently would have the No. 6 seed at 6-5-1. It’s very possible it only takes nine wins to get a Wild Card slot.

Now, the computers aren’t taking into account how bad Sanchez is, but Five Thirty currently gives Washington a 26% playoff chance and 7% division title chance. The schedule is pretty weak on paper:

at the Jacksonville Jaguars (4-8)

vs the Philadelphia Eagles (6-6)

With decent quarterback play, winning at least three of those games would seem very possible.

But Washington is unlikely to get decent quarterback play from Sanchez, or anywhere close to decent quarterback play. They’ll surely go big on featuring the run game led by Adrian Peterson, and get backup running back Chris Thompson heavily involved in the short passing game to make things easier on Sanchez. But opposing teams are aware of this and will stack the box, forcing Sanchez to make real throws.

The Redskins will need to sign another quarterback, with Sam Bradford, E.J. Manuel, T.J. Yates, and of course Colin Kaepernick among the quarterbacks available. All of these players have more physical ability than Sanchez (and in the case of Kaepernick, much, MUCH more), but it’s still hard to see any of them leading Washington to three+ wins either, especially since they’d be joining the team right off the street with no familiarity in the offense.

So, odds are Washington isn’t going to the playoffs, and maybe not even winning another game. But maybe Sanchez can shock the world, put together a month of adequate quarterback play, and make people remember his NFL career for something other than a butt fumble.