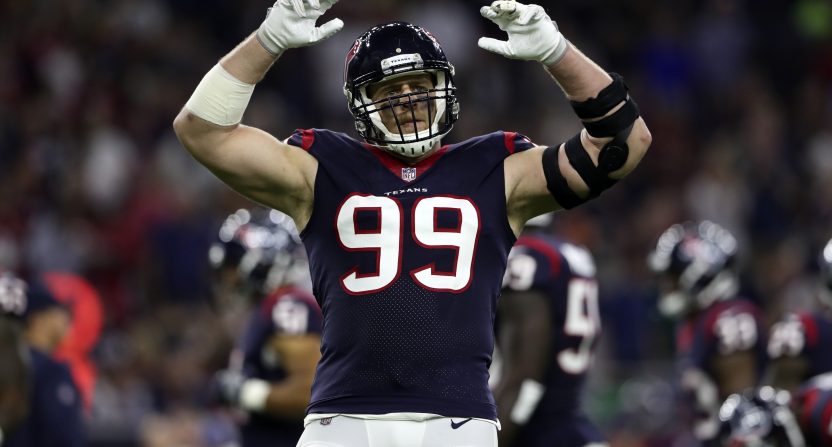 The first round of the NFL Draft might be the night of the year when Americans most boldly feign expertise in subjects they know little or nothing about. On draft night, football fans across the nation act as if they know which offensive tackle has the most promising future ahead of him, which pass-rusher will be able to switch positions most easily and which quarterback is capable of making pre-snap reads that the average couch-potato can’t wrap his mind around even in Madden. Overconfidence doesn’t come much more brazen.

With that in mind, it’s no wonder that the draft is like Christmas for people who like to call out retrospectively bad takes. People like @OldTakesExposed and… three-time NFL Defensive Player of the Year J.J. Watt.

Around 7:30 p.m. ET on Thursday, less than an hour before the draft was set to begin, Watt tweeted a pair of screenshots from the night he was drafted in 2011. The images show Texans fans on Facebook reacting to his selection with insights such as, “Not a good decision,” “Damn we still suck havent we learned from the other failures at DL we drafted in the 1st round” and the classic, “BOOOOOOOOOOOOOOO.” Overall, about three quarters of the shown comments are negative.

It’s hard to imagine now, but Watt was not a can’t-miss star coming out of Wisconsin, as scouts worried about both his strength and his mobility. Watt slipped to 11th in a stacked draft before being selected by the Texans one spot after Blaine Gabbert. Of course, that looks awfully silly today. If teams could go back and re-selected that year’s draft, Watt would almost certainly be No. 1, ahead of even stars like Cam Newton, Von Miller, Julio Jones and Patrick Peterson.

The brilliant thing about Watt’s tweet Thursday is that it forces everyone who sees it to look in the mirror. Have you ever been the guy yelling about how bad a draft pick is without actually knowing much at all about the player you’re trashing? Are you the type to act as if a player you have never seen play will make or break your favorite franchise? If you were a Texans fan in 2011, would you have been booing J.J. Watt?

Of course, no callout from a future Hall of Famer is likely to actually change anyone’s behavior. Those misguided folks who bashed Watt seven years ago will likely be back on Facebook tonight, complaining about whomever the Texans have drafted. That’s the way it goes.