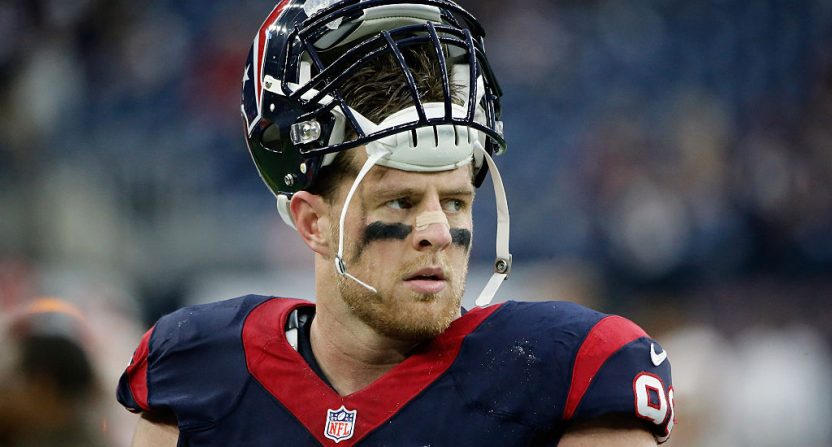 Houston Texans linebacker J.J. Watt has become the face of the Houston sports scene over the course of his career, and he is using his influence and notoriety for a very worthy cause as the city of Houston and the surrounding region deal with the recovery efforts after Hurricane Harvey dumped record amounts of water.

On Sunday, Watt took to Twitter in a video message to start a fundraising effort to raise money for rebuilding efforts with the initial goal of $200,000. He has since had to update the target goal multiple times because the donations continue to fly in.

Recovery efforts from Hurricane Harvey will be massive.
We must come together to help rebuild our communities.https://t.co/SR6DmnNbyM pic.twitter.com/iiMsG2i4dl

Almost two hours later, Watt returned to Twitter to announce his goal of raising $200,000 had already been eclipsed, so he raised the goal to $500,000.

The initial 200k was raised in less than 2 hours.
I have now raised the goal to 500k.
Your support is phenomenal!https://t.co/SR6DmnNbyM

It took less than a day for that goal of $500,000 to be raised through the donation website. Watt mentioned that a sizable donation from new Houston Rocket Chris Paul helped put the donation total over the $500,000 mark.

The generosity of @CP3's $50k donation is actually what put us over the $500k mark. Phenomenal stuff from donations both large and small.

So, Watt once again raised the bar for his followers and more by doubling the goal to $1 million. In just about two hours, the donation total had already jumped up to $800,000.

Hit $500k within 24 hours.
I've raised the goal to $1 million.
Incredible to witness people coming together for the greater good of humanity pic.twitter.com/ZGllA96pwD

Over $800k in 26 hrs
The compassion & generosity of people in times of need is truly remarkable.
We must keep going!https://t.co/WAJk7vpN3X

Still stuck in Dallas, Watt returned with another video update on his Twitter page to inform everyone the $1 million goal had been reached late last night. And with that, another goal was then issued.

By now, you know what was going to happen next. Early Tuesday afternoon, the $1.5 million goal had been reached, and that means one more new goal.

We’ll see just how many times Watt has to keep updating the goals, but the most important thing here is seeing the money coming in from people just wanting to help those in need of assistance. The damage being done in Houston is going to take time and resources to recover from, and every dollar will help with the efforts for those who need it the most.

If you wish to contribute to Watt’s fundraising efforts, you may do so at YouCaring.com if the servers can handle it.