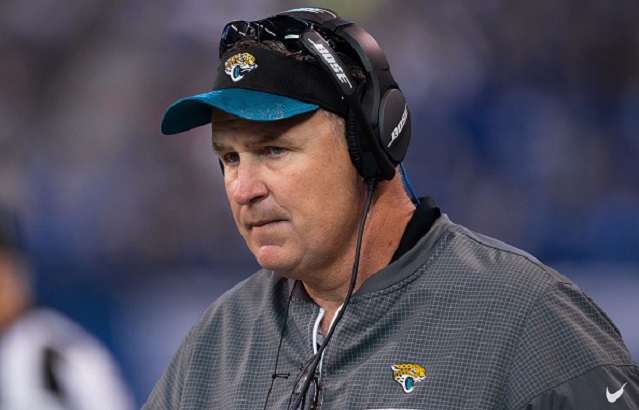 Jacksonville Jaguars fans aren’t excited about keeping Doug Marrone as head coach, but should they be?

Whether it was lost in the shuffle of Monday’s college football title game or because of the team involved, the news that the Jacksonville Jaguars removed the interim tag from Doug Marrone to make him their new full-time head coach didn’t cause much of a stir. As if that wasn’t enough news, the Jags also hired their inaugural head coach, Tom Coughlin, to be the team’s vice president of football operations and gave general manager Dave Caldwell a two-year contract extension.

When the Jaguars have big news, it seems they can only dump it all at once. Such as in 2011, when the team fired Jack Del Rio, extended then-GM Gene Smith, and sold the franchise on the same day.

But what are we to make of this trifecta of stories? Namely, will these moves pull the Jaguars out of the muck and back to respectability again?

On its face, hiring Doug Marrone as the full-time coach is not a terrible idea. He had success in Buffalo where others couldn’t and, in hindsight, had the amazing foresight to leave the Bills before the current mess they’re in fully developed. He also instantly made the Jaguars look like a football team again instead of your high school’s JV team that exists solely so over-zealous parents don’t complain to the school endlessly because their kids aren’t good enough for the varsity team.

So why did it seem like Jaguars fans burst their lids when the news came down, if Marrone isn’t a bad hire?

The process by which the decision was made, from hiring a “search firm” to conduct the quest, only to come back to the interim coach they had on staff all along, and the bizarre hesitance to fire Gus Bradley even when it looked like his team quit on him certainly rubbed people the wrong way. Many would have enjoyed a clean break from the Bradley era, which is not coming when one of his assistants is hired. Also irritating is the idea that this structure could have been put in place, with all of the principal players, back in November instead of now — if this was truly the best solution available, which evidently it is.

Most of the other coaching candidates also may not have wanted to be tied to bust-in-waiting, quarterback Blake Bortles, who Marrone is fine with trying to rehab in the last year of his rookie contract, and that saves the GM from getting a pink slip, at least temporarily.

So those are all of the dynamics in play that made the initial announcement of Marrone’s hiring so toxic. But then. word came down that Tom Coughlin is back with the organization as VP of Football Ops. Coughlin is a legend with the Jaguars and in Jacksonville because of what he did in the team’s first few seasons, so having him back in any capacity would make fans happy.

However, with his addition comes questions about his role and Dave Caldwell’s role. Will Caldwell report directly to Coughlin? Does he have final say on all player personnel decisions? Did Caldwell endorse Marrone for the role, meaning that if he was to come back, Marrone had to be the guy? None of these questions are answered yet and because the Jaguars botched how the narrative of the search played out in the media, no one really has an answer yet.

The Jaguars haven’t had a winning season since 2007 and have only three winning seasons since 2000. They are a bad franchise that has been run badly for years and even more so during Gus Bradley’s tenure. Bringing back Coughlin at least offers credibility in the marketplace to alienated fans, but that only lasts so long. Can this structure work and actually give the Jaguars something they haven’t had in years, which is wins?

There is talent on this roster, but many big free agent signings and drafted players haven’t turned out the way they hoped, and Blake Bortles is one bad year away from being another major QB draft bust, leaving everything here on the precipice. If the Jaguars have another terrible season, then it will be time to wipe the slate totally clean, meaning Marrone, Caldwell and Bortles will all have to go. And there are reasons to be skeptical, especially as holdovers from Bradley’s staff are staying with the team, including defensive coordinator Todd Wash, who was roasted by some of his players in the media after the season ended.

Expectations for next season in Jacksonville will, in all likelihood, be playoffs or bust. The AFC South, even with Tennessee’s emergence, is still a bad division and with a few tweaks, the Jaguars can be competitive. Their schedule is certainly favorable in that regard next season, and with continuity on the coaching staff and plenty of cap space, there’s no reason why this team with the structure now in place cannot compete next season. But so many said that about the 2016 season, and they ended up being the same old Jaguars again.