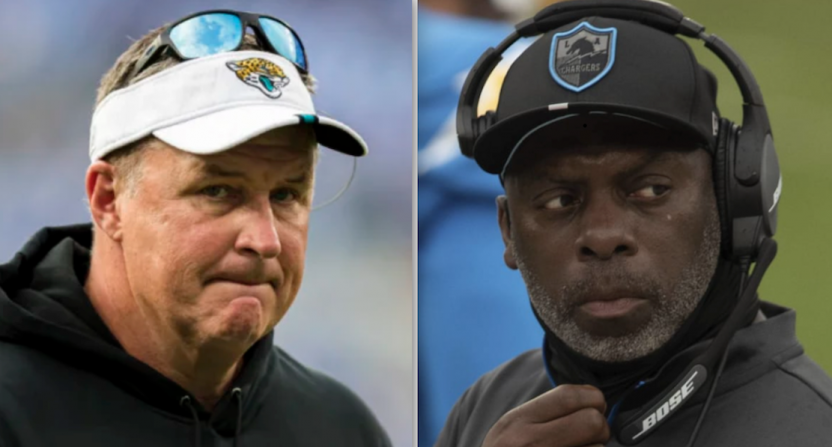 The first Monday after the NFL regular season concludes doesn’t typically bring good news for coaches finishing with losing records. Midway through “Black Monday,” two of them are now looking for new jobs.

Doug Marrone was dismissed by the Jacksonville Jaguars as the morning began. The Jags finished with a 1-15 record, winning five fewer games than they did last season.

Marrone looked as if he was coaching an aspiring contender after going 10-6 and winning the AFC South in his first full season. Yet the Jaguars steadily declined during the next three seasons, eventually bottoming out this year. He finishes with a 23-43 overall record, having taken over as interim coach when Gus Bradley was fired with two games remaining in the 2017 season.

General manager Dave Caldwell was fired in November, leaving an opportunity for an executive or coach who wants personnel authority to take over a team that can add considerable talent this offseason. Whoever fills those openings can remake the team in their own vision, making Jacksonville an extremely appealing destination.

Jacksonville has more to offer than any team hiring a new HC and or GM. Jaguars have the No. 1 overall pick, 11 total picks, over $100 million in salary-cap space and strong ownership. NFL execs and coaches find the Jacksonville situation highly appealing.

The Jaguars have the No. 1 overall pick in the NFL Draft and are expected to select Clemson quarterback Trevor Lawrence as the franchise’s future star. The team will have 10 selections altogether in the 2021 draft, including four in the first two rounds, scoring additional picks after trading defensive stars Jalen Ramsey and Yannick Ngakoue. Additionally, Jacksonville will have nearly $78 million in salary-cap space for the offseason.

Former Ohio State coach Urban Meyer is reportedly Jacksonville’s top choice to be the new head coach. And if the Jaguars hire him, they’ll have paid top dollar to get him. According to Pro Football Talk, Meyer is seeking an annual salary of $12 million. That kind of paycheck will likely come with personnel power, something a first-time NFL coach probably wouldn’t get elsewhere.

As you might imagine, coaches have been buzzing about the lure of this one.

The other firing on Monday was Los Angeles Chargers coach Anthony Lynn. In four seasons, Lynn compiled a 33-32 record. After a 12-4 mark in 2018, the Chargers had losing records the past two years.

(Los Angeles did win its final four games of the 2020-21 season, including victories over AFC West rivals Las Vegas, Denver, and Kansas City. But that wasn’t enough to persuade ownership not to make a change.)

While the Chargers don’t present the same opportunity to remake the franchise that Jacksonville does, their roster already includes several young stars to build around.

Most notable is quarterback Justin Herbert, who had an impressive rookie season completing 67 percent of his passes for 4,336 yards, 31 touchdowns, and 10 interceptions. The offense also features two talented receivers in Keenan Allen and Mike Williams, along with running back Austin Ekeler. Defensive ends Joey Bosa and Melvin Ingram, safety Derwin James, and linebacker Kenneth Murray also make a strong core on defense.

That’s an excellent base for a new head coach to build upon. Leading candidates haven’t immediately emerged but with a young quarterback and talented offense, offensive coordinators like the Chiefs’ Eric Bieniemy, Titans’ Arthur Smith, and Brian Daboll could be a good fit. Michigan coach Jim Harbaugh is also reportedly intrigued by the Chargers job, weighing it against a contract extension with the Wolverines.