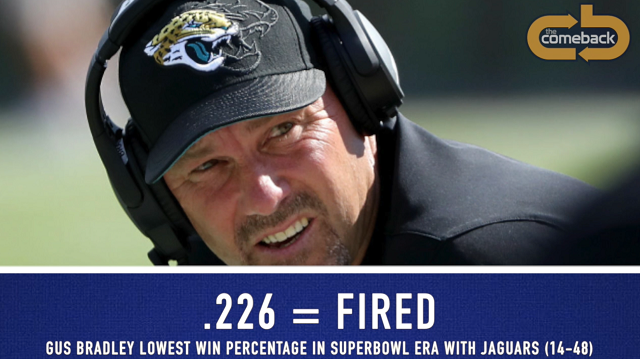 Following their defeat at the hands of the Tom Savage-led Houston Texans, the Jaguars decided to drop the figurative hammer on head coach Gus Bradley.

Considering how poorly his tenure went in Jacksonville, maybe Bradley is lucky it wasn’t a literal hammer. Here’s the statement from owner Shad Khan:

Bradley did not take over a powerhouse team. The Jags were 2-14 in 2012, the season preceding Bradley’s hire; since their 11-5 2007 campaign, they’ve only managed one year without a losing record, going 8-8 in 2010. It was always going to be a rebuilding project, and one in Jacksonville, no less, hardly the most attractive market for potential free agents.

After Bradley went 4-12 and 3-13 his first two seasons, some franchises (okay, the Browns) would have pulled the trigger on Bradley. They would have been mocked for doing so, the prevailing wisdom being that continuity is valuable. Every team attempts to be the Patriots, or the Steelers, or the Ravens; stick with a coach, implement a system, and foster a sustainable model for winning.

That’s fine in theory, and there’s certainly something to be said for avoiding kneejerk, reactionary firings. Good process does not always yield good results in the early-going. It’s important to evaluate coaches on multiple levels, from their ability to motivate players to their in-game strategy to their success with player development, among many others.

The Jaguars gave Bradley another season, and then another. And as young quarterback Blake Bortles continued to regress, and the losses began to pile up, it became more and more apparent that sticking with a bad coach can be very damaging in its own way. Heading into this weekend, this fantastic, almost unbelievable stat emerged:

Bill Belichick could go 0-16 for 41 consecutive seasons and still have a better winning percentage than Gus Bradley.

And after Sunday’s defeat, here’s where Bradley ranks all-time:

Gus Bradley leaves the Jaguars with a .226 winning percentage.@NFLResearch pic.twitter.com/4XHdk9nFUE

That’s obviously quite poor. And again, it’s very possible he’d have done better with better talent. There have been plenty of bad coaches who have had successful seasons with good players. In professional sports, that’s almost always the case. But at the same time, there’s a chance you just have a bad coach. It’s tempting to think that keeping the same system in place can yield returns, but good teams in all sports have shown that sometimes it’s best to risk the organizational shakeup for the sake of better coaching.

Cross-sport comparisons don’t always work, and it’s certainly true that MLB managers and NFL head coaches have varying impacts on the team. But presented with the chance to hire Joe Maddon, the Cubs didn’t think twice about firing Rick Renteria, who had done a passable job. Maddon became the team’s third manager in three seasons, an affront to the idea of continuity. The team responded by winning 97 games. Good coaching trumps continuity any day.

Credit Jacksonville for waiting long enough to find out what they had in Bradley. Until arguably this season, they hadn’t missed out on any playoff opportunities. But as things continued to regress, they made the right call. Hopefully other teams can learn from this. Continuity is great, in theory, but in the end it doesn’t really add value on its own.