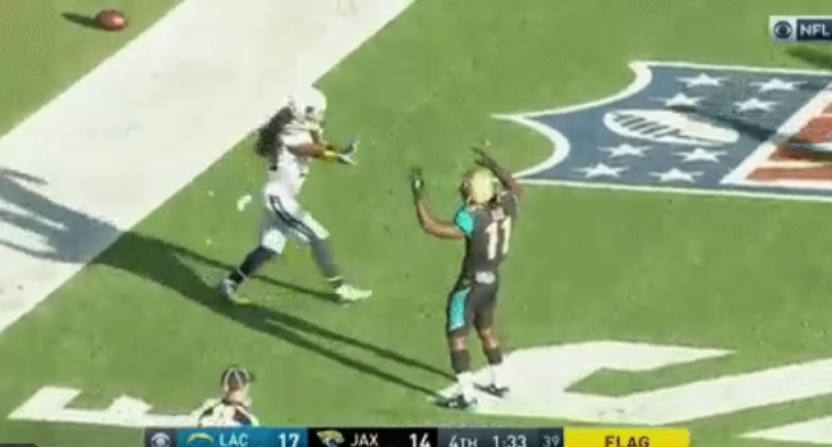 Odds are Hollywood will never make a movie made about the chaotic final minutes of Sunday’s Jaguars-Chargers game, which Jacksonville eventually won 20-17, but there’s no doubt they could if they wanted to.

The final two minutes of regulation alone featured a fumble returned for a touchdown then called back, a player drawing a penalty for celebrating a call he didn’t get, a classic Blake Bortles interception, a costly late-hit penalty and a game-tying field goal. Overtime ended on a deflected field goal that sailed through the uprights anyway.

Let’s start with the go-ahead fumble-return that wasn’t. With 1:51 on the clock and the Chargers up 17-14 with a fresh set of downs, Los Angeles running back Austin Ekeler fumbled into the arms of Tashaun Gipson, who darted all the way to the end zone for an apparent touchdown. The Jaguars had evidently grabbed the lead.

Jacksonville’s joy was short-lived, however, because referees reviewed the play and concluded that Gipson was down by contact at the 36-yard line. The Jags had the ball but not the score. Here’s another look:

Several plays later, with the Jaguars seeking to tie or take the lead, Bortles fired deep downfield in the direction of receiver Marquise Lee. The pass was incomplete, but a flag flew in, apparently against the Chargers. Lee celebrated by doing a little dance in front of a Los Angeles defensive back… which earned him a 15-yard taunting penalty. Oh and there was no penalty against the Chargers after all, so the Jaguars simply lost 15 yards.

Marquise Lee cost his team the game with this pic.twitter.com/SASoilxzVe

On the very next play, Bortles threw an interception directly into Chargers coverage.

At this point, the game appeared to be over. The Chargers had the ball and the lead with 1:24 to play. It would seemingly take a catastrophe for Los Angeles to blow it.

But the Jaguars stuffed Melvin Gordon on three straight runs up the middle, and suddenly the Chargers were forced to punt back to Jacksonville with more than a minute remaining.

Still, the Jags would have been in poor shape if not for a ghastly mistake by typically excellent Chargers defensive end Joey Bosa. With Jacksonville at the Los Angeles 35 yard-line, Bosa was called for a 15-yard roughing-the-passer penalty that pushed Bortles and company into field-goal range. Three plays later, kicker Josh Lambo (released by the Chargers in September) knocked home a 34-yard field goal to send the game to overtime.

Overtime was not quite as wild as the end of regulation because that would have been pretty much impossible. The Jaguars punted, Chargers quarterback Philip Rivers threw an interception, and Lambo stepped up for a 30-yard field goal. The kick should have been easy, but the football gods had one final trick in store for us. The Chargers penetrated the Jacksonville secondary and partially deflected the kick, which nonetheless tumbled through the uprights to seal a Jaguars win.

And so, despite the overturned touchdown, the embarrassing penalty and the egregious interception, the Jaguars walk away with a victory, and everyone in Jacksonville takes a very deep breath.