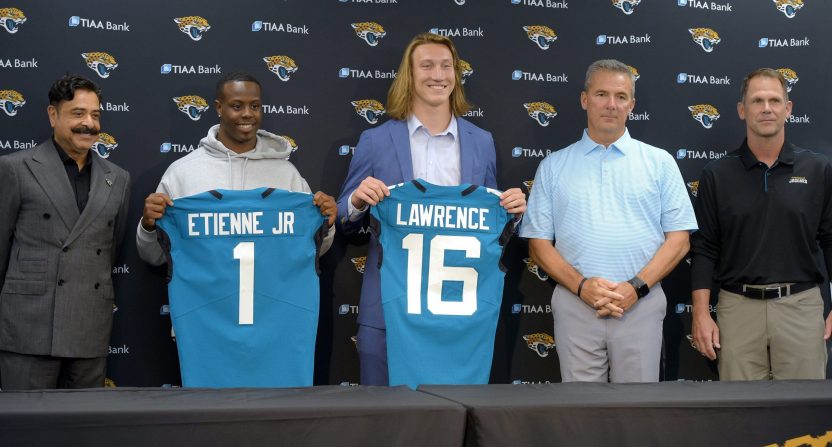 Urban Meyer might try to project leadership, responsibility, and trust, it’s becoming increasingly clear that he seems to lose all of those things eventually wherever he coaches.

He found great success at Florida but reports of a toxic culture drove him to “retire.” He resurfaced at Ohio State and won another championship but his tenure ended in disgrace over the Zach Smith controversy.

Now as head coach of the Jacksonville Jaguars, it’s taken all of four games for the mythos around Meyer to crumble. Along with an 0-4 start on the field, Meyer has become the ultimate “distraction,” in his own words. Videos and photos showing him at a bar, mixing it up with a young woman, while his wife was home with the grandkids, has caused a tidal wave of reactions, none of them good for Urban.

His apology seemed to dodge responsibility, his reputation is taking a beating on social media, and some people have started saying that Jacksonville Jaguars owner Shad Khan needs to fire Meyer already because the writing is on the wall.

Khan released a statement on Tuesday, saying that Meyer’s behavior in the videos and photos was “inexcusable” and that the head coach will keep his job but must “regain our trust and respect.”

“I have addressed this matter with Urban. Specifics of our conversation will be held in confidence,” Khan said in a statement. “What I will say is his conduct last weekend was inexcusable. I appreciate Urban’s remorse, which I believe is sincere. Now, he must regain our trust and respect. That will require a personal commitment from Urban to everyone who supports, represents, or plays for our team. I am confident he will deliver.”

Normally in these situations, you tend to see owners stick up for their guy in spite of the facts or perception. However, short of firing Meyer, this statement has enough teeth to it to make it clear that Urban is no longer untouchable over there. Clearly, if Meyer fails to live up to the standard that he claims to hold his players to again, it sounds like there will be consequences.

Of course, given what we know of Meyer, it’s more likely he’ll “retire” or leave before that point.