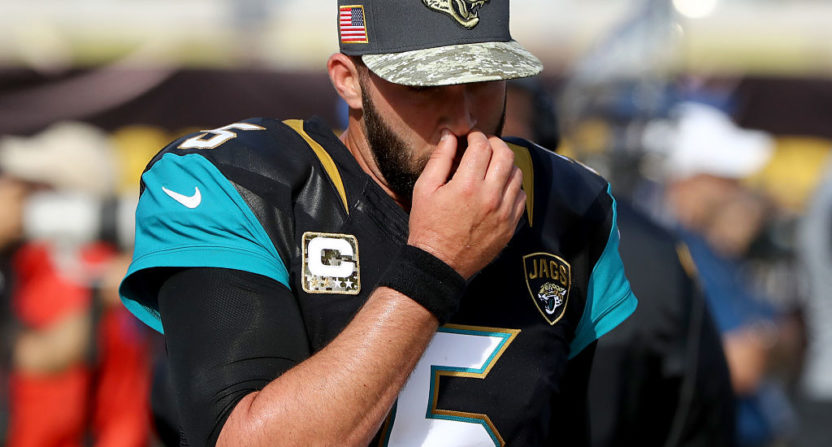 After a nationally televised debacle on Thursday night, Doug Marrone opened up the Jaguars QB competition. Many believe that means the competition is between Blake Bortles and the QB he replaced three years ago, Chad Henne. But instead, this may be a complicit admission that Bortles’ time in Jacksonville is finished, and it might not be Chad Henne who replaces him as the Jaguars’ signal caller.

Bortles did not have any pick-sixes last night, or any shockingly bad decisions, as were his norm in 2016. But the ugly underthrows to Allen Robinson underscored what was becoming fairly obvious: Bortles cannot cut it in the NFL, no matter the work his teammates say he is putting in to improving.

Spoke to a few #Jaguars players after the game. One of the things they were adamant about is that Bortles is putting in a lot of work.

With the QB competition being “opened up,” many believe that means Chad Henne has a chance to be the starter. What it likely means is that Henne is the starter unless Bortles magically turns a corner next Thursday against Carolina. Reading the tea leaves, there may be as good of a chance that Bortles is cut before the start of the regular season as there is him the being starter in Houston.

Once Bortles is benched, he’s benched for good, and there’s no turning back. Then there is the matter of his fifth-year option, which the team picked up earlier in the offseason. Should he get injured at any point, his $18 million salary next season becomes guaranteed, which means the Jaguars will end up facing the same conundrum Washington did with RG3 a few years ago: playing him risks a huge cap problem, even for a team flush with space.

If Bortles is not the starter, it almost behooves the Jaguars to cut bait and start anew without him, and the team has not shown fear in making big and surprising QB decisions at the end of the preseason. In 2007, the team cut incumbent starter Byron Leftwich and handed the keys to David Garrard. Four years later, Garrard was surprisingly cut at the end of preseason. And if Bortles is benched and/or let go, this is who the Jaguars will end up starting:

Bortles and Henne will both not be on the Jaguars opening day roster next season in all likelihood, and the team will almost certainly draft a QB in the rich 2018 draft. With Henne a known commodity, the immediate answer to the Jaguars’ QB questions may end up being Brandon Allen.

The 2016 sixth-round pick hasn’t done anything to show the world he’s the next Tom Brady, but if the 2017 season is a lost cause, why not see what you have in Allen, even if Doug Marrone is worried about putting this much faith in a QB with no first-team snaps?

I think Doug wants a guy with experience but again, he wouldn't rule out Allen. He also said he wouldn't talk external options with us. https://t.co/M74Y64Vy27

Marrone wouldn’t be drawn out on what he’d think about external options being brought in for more competition, but it’s clear the Jaguars whiffed in March and in April by not bringing in new blood at the position. It was rumored in April that they offered a second-round pick to the Bengals for A.J. McCarron, but obviously didn’t pull the trigger.

One of the teams leaked to me that inquired about AJ McCarron: #Jaguars

In theory, he may still be available for the right price, as would be Green Bay’s Brett Hundley or maybe even Teddy Bridgewater. But those solutions would only be stopgap measures, the same as Chad Henne. At least if the team went with Brandon Allen, either in Week 1 or at some point in the season (which now seems inevitable), they could learn whether they have anything in him before the position group looks dramatically different in 2018.

But what seems obvious now is that Blake Bortles is finished in Jacksonville. In theory, he could win his job back, but that would be a herculean task. If teammates are implying that they want a change at quarterback, then his ship has already sailed. In many ways, the break would be cleaner if the team minimized its risk and cut Bortles at the end of the preseason, taking the cap hit for next year and preparing to look in the draft for new blood next year.

The Jaguars have given Blake Bortles every chance to be their long needed answer at QB. Last night was the final nail in that coffin, and now may be the time to cut bait for good, and see whether Chad Henne or even Brandon Allen has a chance to salvage what is in all likelihood another lost season at EverBank Field.