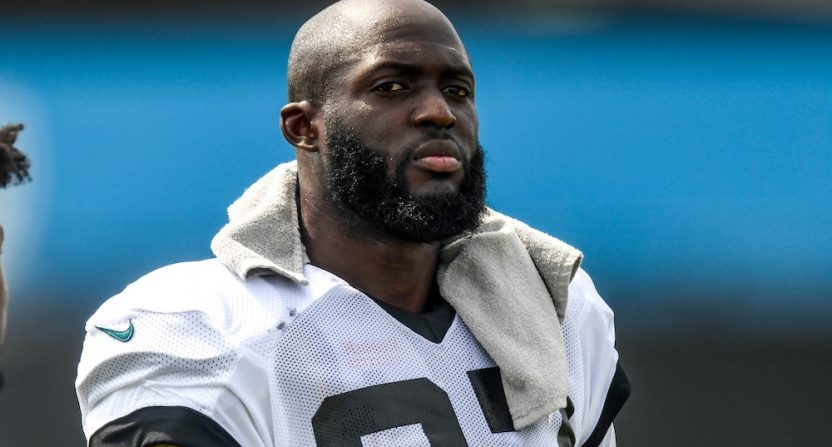 Leonard Fournette and the Jacksonville Jaguars appeared to be an increasingly bad fit during the past year, and the team finally decided to end its relationship with the running back two weeks before the 2020 NFL season kicks off.

On Monday morning, the Jaguars announced Fournette has been released. He was going into the fourth (and final) year of his rookie contract, which was set to pay him $4.2 million (according to NFL Network’s Tom Pelissero).

That salary and Jacksonville wanting a more wide-open offense with quarterback Gardner Minshew II compelled the team to try trading Fournette during the offseason, but couldn’t work out a deal.

Jaguars coach Doug Marrone asked on media Zoom call about attempts to trade Leonard Fournette: "We couldn't get anything. A fifth, a sixth—anything."

Last season, Fournette rushed for 1,152 yards on 265 carries with three touchdowns. He also seemed to break through as a pass-catcher, to the benefit of his NFL career, notching 76 receptions for 522 yards. But his power running style and desire for a heavy, 25- to 30-carry workload was no longer a fit with the system installed by new offensive coordinator Jay Gruden.

But Fournette is only 25 years old with 666 carries over three seasons, numbers that don’t indicate a worn-down running back. Which team might best suit his skills?

Many NFL observers speculate that Fournette would be an ideal fit with the Buffalo Bills, providing a bruising partner with Devin Singletary. The Pittsburgh Steelers also look like a team that could use Fournette as a feature back after James Connor struggled with injuries last season. The Chicago Bears might also pursue him after David Montgomery suffered a groin injury last week.

Tom Brady might also enjoy having Fournette line up behind him in Tampa Bay. Let’s mention the Miami Dolphins, Philadelphia Eagles, Indianapolis Colts, and Detroit Lions too, just to be thorough.

Fournette was Jacksonville’s first-round pick in 2017, selected No. 4 overall out of LSU. He’s the second prominent player shed from the Jaguars’ roster in the past two days. The team traded defensive end Yannick Ngakoue to the Minnesota Vikings for two draft picks on Sunday.

UPDATE: Pro Football Talk’s Mike Florio points out that the Jaguars could still work out a trade before 4 p.m. ET when Fournette is officially waived. Teams interested in Fournette, but might lose out on a waiver claim have more urgency to make a deal now that his release is imminent.