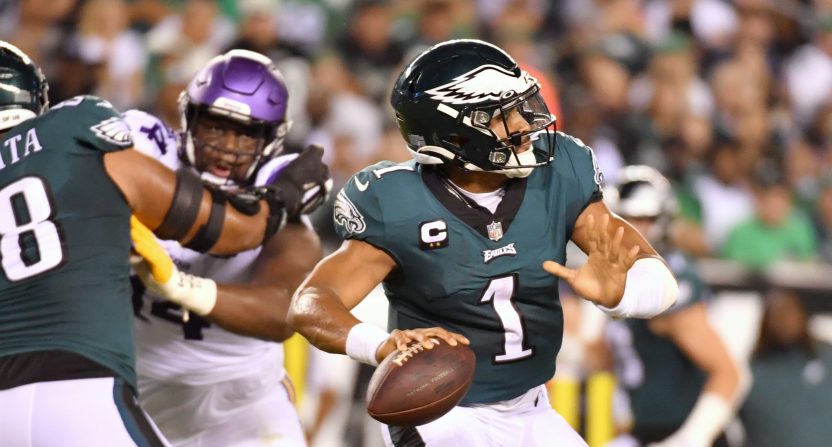 The story of Monday night’s game between the Minnesota Vikings and Philadelphia Eagles can be told by looking at the performance of the quarterbacks. Minnesota’s Kirk Cousins had a dismal performance. But as bad as Cousins was, his Philadelphia counterpart, Jalen Hurts, was that good.

Hurts accounted for three touchdowns on the night. His one passing touchdown came on a 53-yard bomb to Quez Watkins.

That pass was sandwiched between a pair of touchdown runs from Hurts. The first one was a three-yard score in the first quarter. The second was a highlight-reel 26-yard run late in the second.

JALEN HURTS! WHAT A TD RUN FOR THE EAGLES! 🏈💪 #MNF pic.twitter.com/78oWqymZBw

All told, Hurts was 26-for-31 with 333 yards passing with the touchdown and an interception (which was dropped by a receiver into the hands of Minnesota’s Jordan Hicks). On the ground, he had 11 carries for 57 yards with two touchdowns.

If that sounds like a special, unique statline from a quarterback, it is. In fact, it’s unprecedented.

Jalen Hurts of the @Eagles is the first player in NFL history to throw for 300+ yards, complete 80.0+ percent of his passes and rush for multiple touchdowns in a single game.

Football fans and viewers were effusive in their praise of Philadelphia’s signal caller — and rightfully so.

Insane. What a game. https://t.co/zbiWL5Rj2c

Jalen Hurts: leader, baller, play-maker. You're lucky to have him, Philly.

That was Jalen Hurts best game in the NFL

Through the first two games of the season, Hurts has completed 70% of his passes for 576 yards with one touchdown, one interception and a 97.1 passer rating. He’s had 28 carries for 147 yards and three touchdowns.

Perhaps the most important stat, Hurts has helped the Eagles to a 2-0 record.