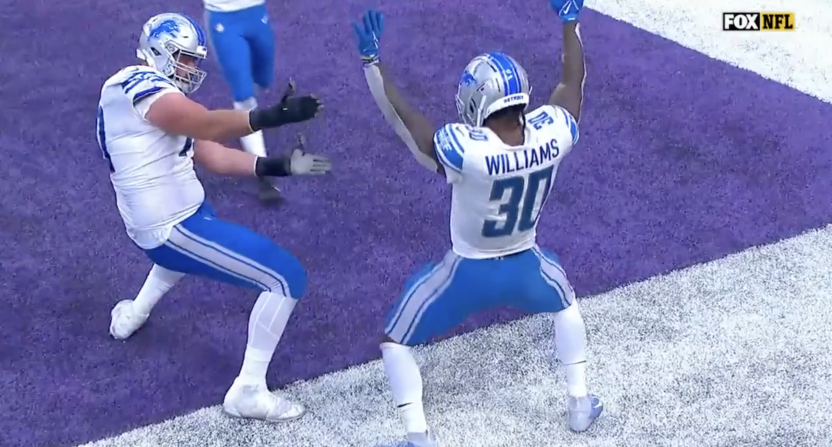 Detroit Lions running back Jamaal Williams had a stellar performance against the Minnesota Vikings on Sunday afternoon, scoring two touchdowns and accounting for 87 yards on the ground. But when he crossed the goal line for his second touchdown of the game, he might have gone a little too hard with his celebration.

After finding the end zone for the second time in Sunday’s game, Williams dropped the football and got busy with a wild celebration that included plenty of hip rotation and pelvic thrusts.

Apparently, it was too much for the referees, who threw a flag on the celebration and gave Williams a 15-yard penalty for unsportsmanlike conduct. But Williams doesn’t think the penalty was deserved.

Jamaal Williams on the unsportsmanlike conduct penalty he received after scoring his second touchdown in todays loss against Minnesota. #OnePride pic.twitter.com/6zdQZsOpv4

“I’ve been doing this forever, so now, my stuff isn’t correlating? Nothing against them, but that’s mine. My hips. It’s not even thrusting. It’s more like a wave,” Williams said after the game in a video shared by Woodward Sports Network. “That’s how I should get away with it. I’ve been getting away with it for all these years, but now they want to bust me for it. I was pissed. I was sad and disappointed in myself that I gave the team a penalty… It really, like, stepped my mood a little bit.”

Despite Williams’ two-touchdown performance, the Lions still fell to the Vikings 28-24.