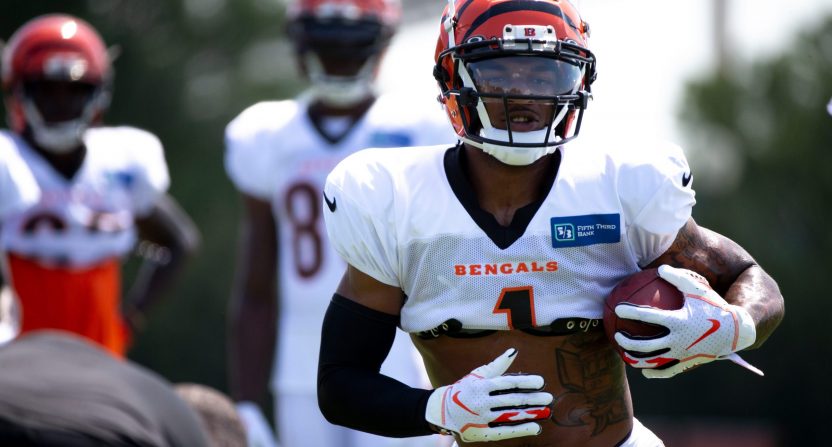 When the Cincinnati Bengals drafted LSU wide receiver Ja’Marr Chase with the No. 5 pick in the NFL Draft, the franchise had very big ideas about what he’d be able to accomplish, especially given that he’d be reconnecting (literally) with quarterback Joe Burrow.

However, things have gotten off to a rocky start for Chase as he’s been plagued with plenty of drops during the preseason. In fact, he dropped the last four passes that were thrown to him, including a bubble screen. Apparently, Chase has been dropping lots of balls in practice as well.

When asked about why he’s been struggling so much to catch the football, Chase told reporters that the issue lies in the ball itself.

“The ball is different because it is bigger,” Chase said, via the Bengals’ official website. “It doesn’t have the white stripes on the side so you can’t see the ball coming from the tip point so you actually have to look for the strings on the ball at the top, which is hard to see because the whole ball is brown and you have the six strings that are white. But for the most part, just have to get used to it and find out what I am comfortable with catching.”

It’s true that the ball used in NCAA football and the ball used in NFL is different, especially with the lack of white stripes on the pro version. But considering this hasn’t been an issue for many other rookies transitioning from college to the NFL, some wonder if this is simply an excuse to make sense of something Chase can’t explain at the moment.

I don’t think Jamarr Chase is having a hard time because of the size of the ball or the lack of white stripes, because I’m going to venture a guess that he trained in the pre draft process with a pro ball.

His quotes sound more like rationalizations from a guy with the yips.

Chase did add that he doesn’t want to simply blame the ball. He also knows he needs to get his mind right for the NFL.

“I don’t want to blame it on me sitting on my butt the whole year, but it probably had something to do with it, of course,” Chase said. “There’s a bigger ball adjustment, so I don’t want to make excuses but I’ve just got to be a pro and make the catch.”

T.J. Houshmandzadeh, a Bengals receiving legend who now works with college receivers transitioning to the pro game, thinks that Chase will work it out and be just fine.

“Just relax and play and don’t think about it. He says he’s not. But he is. Human nature,” said Houshmandzadeh, who trains college receivers for the pros. “Just work on getting open and creating separation. The rest will come. You know you’re going to catch the ball.”

The Bengals sure hope so.