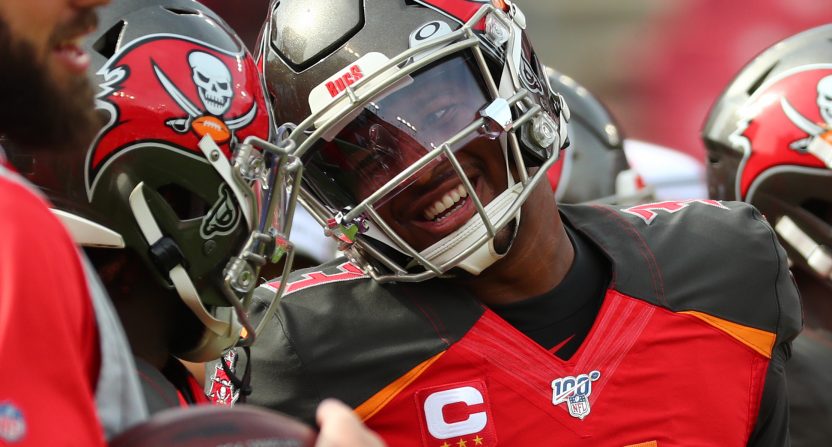 You gotta hand it to Jameis Winston. The Tampa Bay Buccanneers quarterback always knows how to make a great headline. Whether those headlines are good or bad is another story altogether.

Sunday, Winston became the first player in NFL history to throw for 30 touchdowns and also throw 30 interceptions in one season. And as is typical of Jameis, he set that mark in style, throwing a pick-six in overtime to lose the game and end Tampa’s season.

Jameis Winston throws a pick-6 to end the season. #Falcons win it in overtime. How fitting.

It has truly been a wild ride for Winston all season long and Sunday’s game might have been a perfect microcosm of the Jameis Experience. Early in the game, he crossed the 5,000 passing yard mark on the year, becoming only the 8th NFL quarterback to ever do so and joining the ranks of Dan Marino, Peyton Manning, and Tom Brady. He also threw for four touchdowns on the day, which gives him 35 on the year, good for No. 2 overall in the NFL behind Baltimore’s Lamar Jackson.

However, there’s also the pick-six interception that ended the game. It was the only interception he threw on the day but it was an absolute backbreaker and the kind of decision that doomed his team and throws all of his good deeds out the window. Especially for a franchise that is still considering whether or not to sign him to a new deal as their starting quarterback.

Jameis Winston’s first pass under his rookie contract with the Bucs was a pick-six.

Jameis Winston’s last pass under his rookie contract with the Bucs was a pick-six.

It’s hard to imagine that the Bucs would just walk away from Winston, even with his boneheaded decision-making (his 86 interceptions is the most of any QB since he entered the league in 2015). That’s because while he’s turnover-prone, he’s also arguably the best quarterback in Tampa Bay Buccaneers history and he’s only 25. The thinking is likely that you might be able to do better than Winston when it comes to ball control, but are you really going to give up on the investment in him for an unknown quantity? Of course, Tampa hasn’t been particularly good for most of Winston’s time there, but that’s not entirely his fault (pick-sixes aside).

Jameis with a season for the ages. We Stan an average king

Whatever happens, Winston remains a fascinating experiment to watch. There are great quarterbacks who seem to command the field at all times. There are bad quarterbacks who don’t seem to have any grasp on what’s happening. But there are so few quarterbacks like Jameis, who is capable of creating an unbelievable play or a nightmarish error on just about every pass he throws, and it’s impossible to know when which will be which.

I like to imagine Jameis tell’s his RB right before the snap “watch this im about to do something dumb as shit and its gona kick ass or suck” pic.twitter.com/xzcDzToFm8

If you know anyone who plans on rooting for the Bucs for the foreseeable future, make sure you get them stocked up on antacids. It’s gonna be a wild ride.