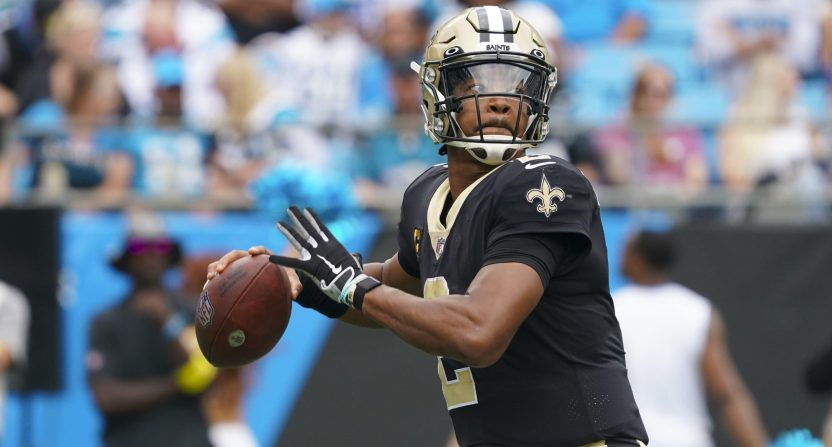 This weekend will feature the first NFL game in London of the 2022 season and it appears that the New Orleans Saints may be without a huge part of their offense when they go up against the Minnesota Vikings.

Saints quarterback Jameis Winston has been dealing with a nagging back injury with four fractures in his back.

The injury has not yet affected Winston’s availability this season, but some significant changes have come for the organization’s practice reps compared to the past couple of weeks.

Winston was absent from Wednesday’s practice along with star wide receiver Michael Thomas, according to Saints beat writer Jeff Duncan.

Looks like the Saints are preparing in case they have to make a change at quarterback. Jameis Winston was not at practice today. Andy Dalton took first team reps at QB, with Taysom Hill receiving reps as a reserve QB. This is different than past weeks.

There is still plenty of time for Winston to potentially return to practice and start on Sunday, but many see this as an indication that Winston may be in jeopardy of missing out.

#Vikings may face someone other than Jameis Winston this Sunday https://t.co/8LVbBvEKq4

Last Wednesday he just watched then was limited the next two days. B it Taysom was hurt so every week is different now. https://t.co/zSJTVG0Esd

Because I still think you’d go back to Jameis when he’s right. But if you think the critics are loud now…

Saints head coach Dennis Allen discussed Winston’s absence from practice, saying that this was a scheduled rest day to “make sure that he’s healthy.” Allen added that he anticipates that Winston will be back at practice on Thursday.

#Saints HC Dennis Allen says Jameis Winston, who didn’t prax, said it was a rest day to make sure he’s healthy – anticipate he’ll be back on field for Thursday’s prax.

While Allen seems to feel that Winston may be good to go this weekend, his injuries have very clearly hampered his play this season.

After an impressive 2021-22 season with 14 touchdowns and only three interceptions, Winston has reverted back to costly turnovers that have plagued his career.

Winston is currently tied with Matthew Stafford and Mac Jones for the most interceptions thrown this season, which has led to a ton of criticism of his performance on the field.

A player like Andy Dalton is certainly capable of performing in the right situation when called upon, and it may be worth starting him this weekend to give Jameis Winston some much-needed rest from his back issues.