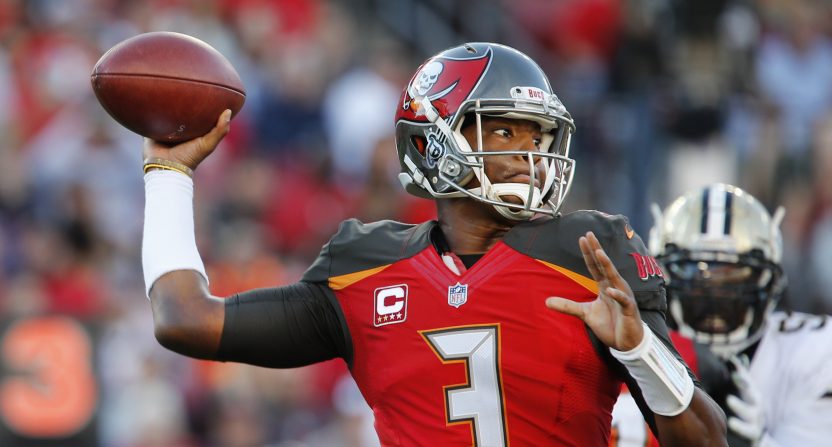 A 2016 allegation from an Uber driver will reportedly cost Jameis Winston the first three games of the upcoming NFL season.

Per ESPN’s Adam Schefter, the Buccaneers quarterback will be suspended for violating the NFL’s personal conduct policy, following a months-long league investigation. BuzzFeed reported last fall that an Uber driver in Scottsdale, Arizona had accused Winston of grabbing her crotch at a drive-thru in March 2016. Winston denied the allegations, but the NFL opened a probe, the result of which will reportedly be announced in the coming days.

ESPN’s Tallahassee host Jeff Cameron initially reported Winston was bracing to be suspended – and he will be.

Schefter reports the three-game suspension could be subject to change.

The league still has not notified Winston of its official decision, and the circumstances surrounding it still could lead to an increase or decrease of the three games, per sources. But as it stands now, the league is preparing to suspend Winston for three games.

One source said Winston could be notified as early as Friday, but others think it is will be handed down sometime in the next week, per sources. An appeal could be discussed, but they have proven to be largely fruitless in the past, most recently with Cowboys running back Ezekeil Elliott, who was suspended six games last August.

Winston has a well-documented history of off-field incidents, by far the most serious of which was the rape allegation brought against him in 2013. After a highly controversial police investigation, no charges were brought against the then-Florida State quarterback, and Winston later settled his accuser’s civil suit for an undisclosed amount.

While at Florida State, Winston was also accused of shoplifting (on multiple occasions) and making vulgar comments in the school’s student union. He had avoided scandal over his first two years in the NFL until the groping allegations broke in November.

Tampa’s first three opponents this fall will be New Orleans, Philadelphia and Pittsburgh, all of whom won at least 11 games last season. With Jameis, those games would have been difficult for the Bucs. With Ryan Fitzpatrick under center instead, they figure to be nearly un-winnable.