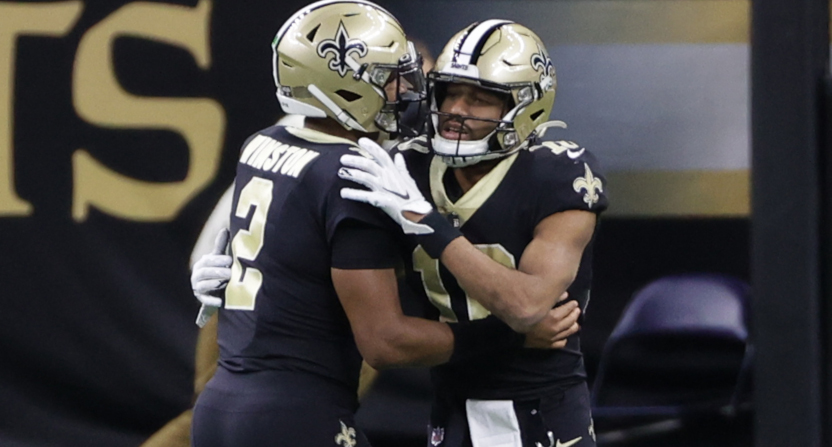 The New Orleans Saints pulled off a great 56-yard touchdown on a trick play with backup quarterback Jameis Winston in the second quarter of their divisional-round playoff game against the Tampa Bay Buccaneers Sunday. And it was awfully similar to what the Chicago Bears tried against them last week, a play that worked great until receiver Javon Wims dropped an open catch in the end zone. For New Orleans, this play (which came with Winston just subbing in for starter Drew Brees, who returned to the game on the next series) wound up leading to a touchdown, thanks to Tre’Quan Smith (seen above celebrating with Winston) making the catch. Here’s the Bears’ play from last week, with Chicago snapping it to RB David Montgomery, who handed it to WR Cordarrelle Patterson, who flipped it to QB Mitch Trubisky, who threw it to Wims, who dropped it:

Can’t be dropping those against the Saints.pic.twitter.com/CpMzzCIfJ9

And here’s the Saints’ play from this week, with New Orleans snapping it to RB Alvin Kamara, who handed it to WR Emmanuel Sanders, who flipped it to Winston, who threw deep for Smith, who caught it:

And Patterson, who was involved in that Bears’ play, took note of the similarities:

It’s pretty cool to see the Saints pull off a play like this just a week after one was run against them. And theirs had a better ending. And it’s interesting to see them doing this with Winston for a deep shot, especially against his old team. We’ll see if they feature him more going forward.