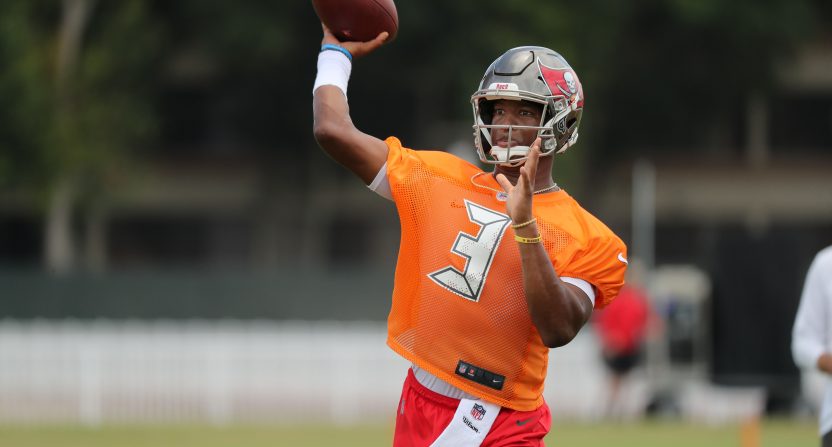 Sometimes it seems as though NFL decision-makers determine player discipline by closing their eyes and spinning a wheel.

On Thursday, the league officially announced it would suspend Tampa Bay Bucs quarterback Jameis Winston three games for inappropriately touching an Uber driver — a punishment that prompted one obvious question: In a league where someone can be sidelined four games for playing with under-inflated balls, how can the sanction for sexual assault be only three?

When ESPN reported last week that Winston would likely miss three games over the Uber incident, which took place in Scottsdale in March 2016, it seemed that number must have been some sort of bargain. Maybe the league couldn’t ascertain whether Winston had really groped the driver and was compromising between not suspending him at all and punishing him to an extent commiserate with his alleged offense. But on  Thursday, the league stated unequivocally that the quarterback had “violated the personal conduct policy by touching the driver in an inappropriate and sexual manner without her consent.” Winston, meanwhile, released a statement that read, in part: “First and foremost, I would like to say I’m sorry to the Uber driver for the position I put you in. It is uncharacteristic of me and I genuinely apologize.”

That sounds an awful lot like a confession. And if it is a confession, and there’s no doubt that Winston inappropriately touched the driver, we’re back to where we started, wondering how an act of sexual violence toward a defenseless woman can warrant only a three-game penalty.

Three games for groping a stranger without her consent would be questionable enough for someone with a spotless behavioral record. But Winston, of course, is not new to allegations of sexual assault. In 2014, he was accused of raping a fellow Florida State student, eventually settling a civil suit for an undisclosed figure. Winston avoided criminal charges in the case following a controversial police investigation, but there remains ample reason to suspect the quarterback was not as innocent as he claimed.

The NFL, of course knows that. It knows that Winston had vowed to be on his best behavior upon entering the league, to prove that he was not the type of person who touches women without their consent. And yet when Roger Goodell and company had an opportunity to send a lesson to Winston and to any other player who feels entitled to someone else’s body, they came up with a three-game slap-on-the-wrist. There is no suitable explanation. It’s just the NFL being the NFL, in the ugliest way.