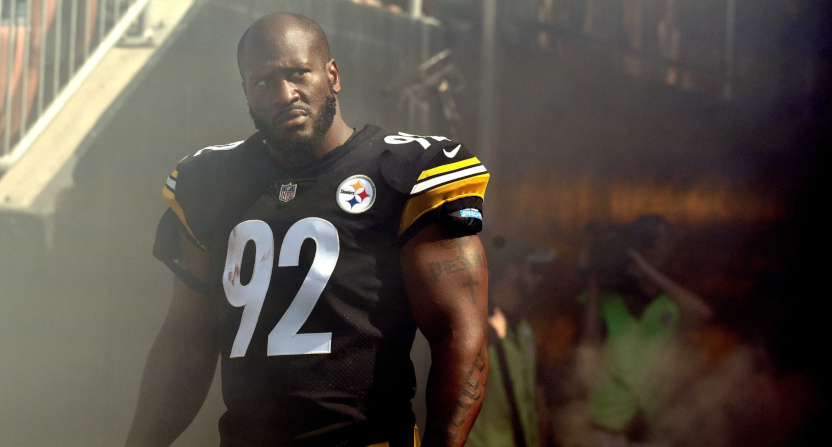 The talk of the NFL over the past 24 hours was former Pittsburgh Steelers linebacker James Harrison revealing that he was given an envelope by head coach Mike Tomlin after his hit on Cleveland Browns wide receiver Mohamed Massaquoi in 2010.

In case you haven’t heard the full exchange, Harrison was on Barstool’s Going Deep podcast and he answered that the most he was ever fined was $75k for the Massaquoi hit.

It’s clear that Harrison realized he was going down a bad road and he tried to be careful with what he was saying while he was saying it, but he says enough to get him in trouble and not enough to have people fully understand the situation .

And that’s the trouble. After Sean Payton weighed in, given his involvement in Bountygate, many compared what happened with Harrison to Bountygate. That resulted in Harrison to post a scathing response to those who he felt may have unfairly connected the dots.

Wow y'all really comparing what I said to BOUNTYGATE?!? Mike T. Has NEVER paid me for hurting someone or TRYING to hurt someone or put a bounty on ANYBODY! If you knew the full story of what happened back then you'd know that BS fine for a Legal Play wasn't even penalized during the game. The league was getting pressure because the first concussion lawsuits were starting and they had to look like they cared about player safety all of a sudden. Before that they had been SELLING a photo of THAT SAME PLAY FOR $55 on the NFL website with other videos of the NFL'S GREATEST HITS that the league Profited On back then. When the league had to start pretending like they cared about player safety they took all those things down off their website and they started fining guys ridiculous amounts for the same plays they used to profit off of. EVERYBODY knew it – even these same media people and all the fans that were sending money to me and the team to cover the fine. AGAIN AT NO TIME did Mike T. EVER suggest anybody hurt anybody or that they'd be rewarded for anything like that. GTFOH with that BS!!! #receipts

Whether or not you feel what the Steelers allegedly did was as bad or worse than what the Saints got heavily penalized for, Harrison is correct in that the two situations are different. The Saints largely got in trouble for having a system set up in advance for hitting certain opposing players.

Harrison left it ambiguous (again, part of the problem), but he didn’t say anything about Tomlin making a deal that if Harrison hit a certain player he’ll get an envelope of, what I assume is, money. The story seemed like Harrison made the hit, he and Tomlin both felt they were clean hits, and because Harrison was fined, Tomlin gave him the envelope to make up for some of that fine. We can debate how bad that is and if the Steelers should be penalized for that, but if that situation is true, that’s not a bounty in the sense the Saints got in trouble for.

Going back to Harrison’s comments, he shouldn’t be getting mad at anyone for interpreting his comments in an incorrect way if he was only willing to give a half-assed explanation. It seemed Harrison didn’t want to get anyone in trouble but by not clearly explaining the situation, he got everyone in trouble. He can be upset lots of people took his words in a certain way but is he really that naive to think that wouldn’t happen, especially given that he failed to fully explain the situation?

It’s like posting something on Twitter. Many people get in trouble for trying to make a point on a serious topic and in trying to fit that within 280 characters, cannot effectively articulate their point and people take it the wrong way. Yes, it would be nice for people to understand your point, but there’s also the option of not tweeting in the first place and if you can’t do that to the best of your ability, a bunch of that falls on you.

That applies to James Harrison. If he couldn’t or didn’t want to articulate his initial comments, he shouldn’t have said them in the first place. Harrison tossed a live grenade into the crowd and now everyone is picking up the pieces in the aftermath.