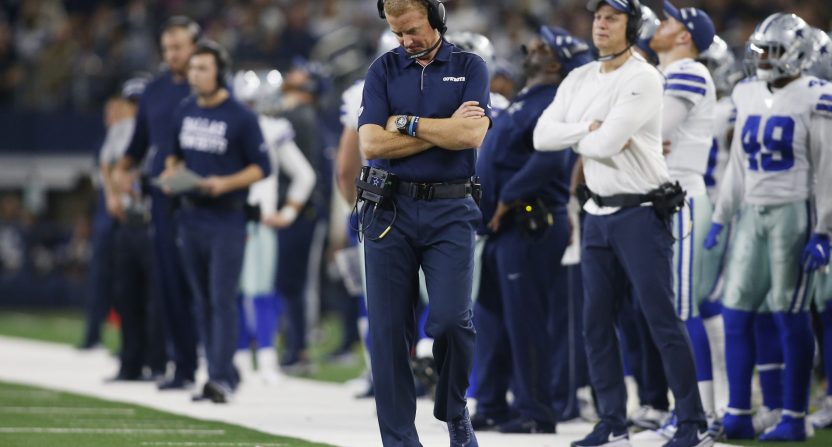 The Jason Garrett Getting Fired saga is finally over. Jay Glazer broke the news on Sunday evening that the Dallas Cowboys had officially fired the 10-year head coach, ending one of the strangest NFL firing cycles in some time.

Cowboys informed Jason Garrett this afternoon that they are officially moving on from him. So it’s a done deal. Was always sensitive for Jerry bc of his relationship with Jason. But it’s now official between the parties

ESPN’s Ed Werder had reported Thursday that Cowboys owner/general manager Jerry Jones and executive vice president Stephen Jones had made the decision to remove Garrett from the organization. We also heard that the Cowboys had started interviewing replacements for Garrett during the week, including former Packers coach Mike McCarthy and former Bengals coach Marvin Lewis. However, with no official announcement, Garrett technically remained the head coach and questions swirled about just what in the world Jerry Jones was up to.

Perhaps the strangest detail yet in a saga full of strange details was this one from Ian Rapoport.

The #Cowboys have officially fired coach Jason Garrett, and Garrett has allowed them to do so, source confirms. Obvious but now done. https://t.co/DnGtEWNuDF

Garrett “allowed” the Cowboys to fire him? How does that work? And what, exactly, is the implication?

“The Cowboys have fired Jason Garrett, and Garrett has allowed them to do so…”

We don’t know too much about the contract details between the Cowboys and Garrett but saying that Garrett had some kind of say in his employment seems to imply that there were specifics in the deal that were part of the reason the firing was held up.

The alternative theory, as the NY Post noted, is that Garrett simply kept fighting to save his job right up until the point of no return (and even then seemed to keep fighting for a few days).

“Never seen anything like it,” Glazer said Sunday on Fox’s pregame show. “Because Jason Garrett, they’ve gone to him now multiple times this week to say, ‘OK, you’re out as the head coach.’ And he says, ‘Hold on, don’t do it yet, I still want to be considered for this.’ And every time they do it, say, ‘We’re moving on, we’re starting to interview other people’ … They have to tell Jason Garrett, ‘No, you’re gone, we’re moving on.’”

There was also an emotional component, as Jones and Garrett had a lot of strong history. Not just since Garrett has been his hand-picked head coach for a decade but also because Garrett was a quarterback for the franchise and longtime assistant before that. In this case, it seems that Jones was attempting to do this without ruffling feathers but Garrett’s insistence made it impossible.

We may never know exactly what went down in the last week following Dallas’ collapse at the end of the season. Of course, we might also get an in-depth oral history or even a 30 for 30 about this, given how weird it’s been. But regardless, the Dallas Cowboys will have their first new head coach since 2010.