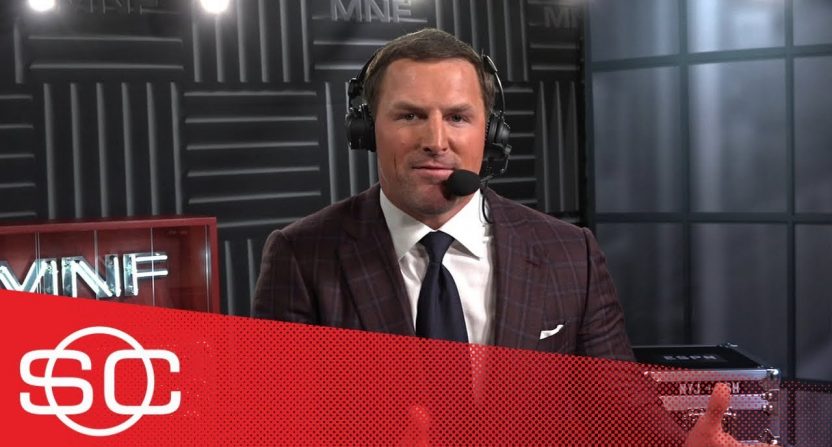 Regularly–criticized Monday Night Football color commentator Jason Witten actually earned some plaudits this week for his condemnation of the Redskins claiming Reuben Foster after the 49ers released Foster following his second domestic violence arrest in a year. However, Witten then took some criticism based on how those comments compared to Witten’s previous remarks in support of the Cowboys signing Greg Hardy in 2015 (after Hardy had been found guilty of assaulting his ex-girlfriend; Hardy later appealed and saw those charges dropped after his accuser didn’t testify in the appeal). And now, he’s addressing that criticism.

Two days after his on-broadcast remarks Monday, Witten responded to one of those critics, Black Sports Online’s Robert Littal. Littal wrote a piece Monday titled “Why Jason Witten Must Address Why He Praised & Embraced Greg Hardy on Cowboys But Says He Has Zero Tolerance For Reuben Foster Signing.” and he tagged Witten in his tweet of it. Here’s the response Witten tweeted Wednesday:

Thanks for your opinion, Robert. Privately, I let my opinion be known and agreed to disagree. That day after practice I chose not to be divisive. Prob went too far. On Monday with platform and no longer member of a team,I spoke my mind. Would love your support w/
SCORE Foundation https://t.co/0ipiGwX1Hi

(For the record, the SCORE Foundation in question is Witten’s foundation, which is heavily involved with various anti-domestic violence efforts across Texas.)

On one level, it’s understandable where Witten is coming from. It’s not easy to publicly criticize a teammate and an organization you work for, and Witten was not the Cowboys’ general manager or coach; he didn’t make the decision to bring Hardy in. And to be fair to Witten, he noted that even at the time in his praise for Hardy. However, “I expressed my criticisms internally” doesn’t solve everything, especially when you consider that Witten still offered glowing reviews of Hardy’s work ethic then, which stand out in contrast to his comments on Foster this week:

Also I am not trying to discredit Jason Witten's experiences, but here is what he said about Greg Hardy. Like I always tell you guys lot of hypocrisy comes out of these guy's mouth. pic.twitter.com/iSn4EnzNRX

Still, people can learn from their mistakes, and Witten noting that he “probably went too far” in his 2015 comments about Hardy seems like at least a step in the right direction. And it’s probably better to have Witten criticizing the Foster move now if that’s how he feels about it instead of just sticking with the comments he previously made about Hardy. But taking three days to address this isn’t the greatest look in the world, and Witten might have been smarter to address his Hardy comments on the broadcast as well and explain why he had praise for Hardy after that signing. It’s good to see him discussing this now, but it’s not exactly a prompt response to the criticisms he took, or one that totally answers them.