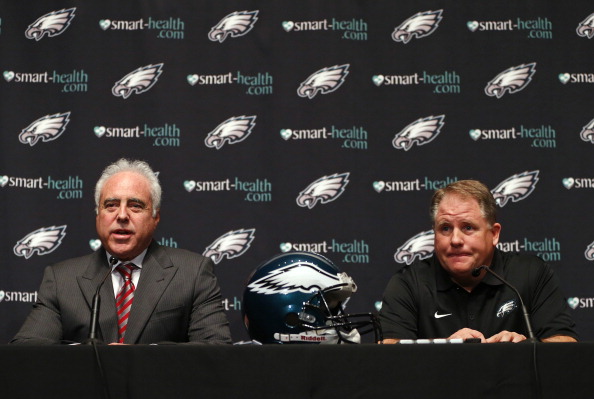 The Chip Kelly experiment in the NFL took an abrupt turn on Tuesday night as the Philadelphia Eagles fired him with just one game remaining in his third season in the City of Brotherly Love. As team owner Jeffrey Lurie took to the stage to speak with the media on Wednesday, it appears he had little of that Brotherly Love for Kelly.

In what could only be described as a press conference designed for Lurie to throw Kelly under the bus, the Eagles’ owner took multiple routes to achieve his goal and deflect attention away from his decision to hire Kelly.

He did that in spectacular fashion. Here are all the ways he threw Kelly under the bus:

1. Kelly Stunk as a Talent Evaluator

“It’s never one thing when you make a change. It was more the lack of progress and trajectory we were going.” – Lurie on losing lockerroom

“Going forward a much more collaborative approach between player personnel & coaching is the way we’re going to go.” – Lurie on Eagles staff

For some teams, total control in the hands of the head coach works, like with Bill Belichick in New England for example. However, the acquisitions of Sam Bradford and DeMarco Murray are just a few of the plenty of questionable calls in evaluating talent and career paths. Bringing in a mediocre passer and a Pro Bowl running back that suddenly lost his abilities was a huge indictment on his ability to figure out what works for his system and who would execute it at the NFL level.

In Green Bay, the collaborative efforts of long-time tandem Mike McCarthy and Ted Thompson have made the Packers perennial playoff contenders and in other locales, there are great head coach-GM combinations as well.

There is clearly more than one way to win a championship in the NFL, but if you’re going to give full control to someone on personnel decisions, shouldn’t you be crystal clear that the one you’re giving control to is competent enough to make it work?

2. No One Liked Chip Kelly in this Organization

It also didn’t help that Kelly and the team, ownership group, and front office apparently didn’t see eye to eye on *anything* and didn’t even get along within the workplace environment.

Chip Kelly had virtually no allies at the NovaCare and then lost Jeffrey Lurie. Was tolerated when he won. Endeared himself to no one.

Lurie said it all when asked what he's looking for in coach: "open up your heart to your players," communicate clearly with people. #Eagles

It was telling that Lurie didn’t even bother to hold back in letting those inner details loose either. Normally those are things left for speculation and the infamous “sources within the organization” reports.

No reporter is going to need that now, as Lurie spoke his mind on how he felt Kelly didn’t fit in.

3. He Warned the Rest of the League About Who Kelly Was Behind Closed Doors

Not only did Lurie tell it like he saw it in his organization, but he also sent a warning out to the rest of the league, basically saying “don’t hire this guy because he’s bad for your culture”. Just how bad?

So bad that a talk with the players led to Lurie to fire Kelly with a single game remaining and zero chance of making the playoffs in 2015. Apparently, a locker room full of hate for their head coach is what Lurie saw and decided to tell the whole world about.

“The opportunity to spend a lot of time with our players. That was the defining decision.” -Lurie on why now, not after season to fire Kelly

Indicting a coach publicly about not only losing the locker room, but also revealing that no one really cared to play for or wanted to be around a head coach is completely throwing someone under the bus…and also perhaps running him over a few times on the way out as well.

4. Chip Kelly Made All the Decisions That Got Eagles Here, Not Me

No message was more clear from Lurie than the fact that Chip Kelly, and Chip Kelly, alone was the man in charge of doing the things that got the Eagles to 26-21 in his tenure as a head coach. There was no collaboration with the front office or ownership group to say the least.

“I wanted to make Chip accountable for everything he wanted to have happen. One of the ways…was to have him make those decisions.” – Lurie

Why else make that statement than to save your behind and kick the old coach’s one last time on the way out the door?

Clearly Lurie wanted the media, the fans and the rest of the league to know Kelly was the man behind everything you saw and no one was happy about it.

Press conferences are usually an artful expression in takin care not to disaparge or damage the reputation of an outgoing coach. There’s the usual “thank you” and “best wishes in your future endeavors.”

On Wednesday, those were clearly not the sentiments of Lurie or the Philadelphia Eagles organization as a whole. Instead, it felt more like an exercise in cleansing the soul of a bad virus, and telling the whole world how you did it.

That’s not the usual route taken, but then again, hiring Chip Kelly wasn’t the usual route either. Lurie has to take responsibility for that instead of laying it all on the guy he went out and hired.