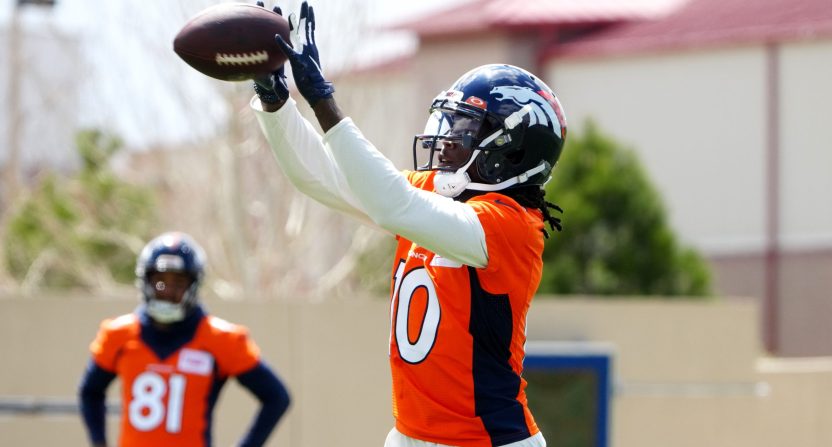 On Thursday, news broke that Denver Broncos wide receiver Jerry Jeudy had been arrested, though no details were known at the time. It wasn’t until the afternoon when the Arapahoe County Sheriff’s Department tweeted out details and provided more context for what had happened.

Jeudy was booked into jail on a misdemeanor charge of second-degree criminal tampering, with a domestic violence sentence enhancer, according to the office.

Per a Colorado statute, someone commits second-degree criminal tampering if he or she “tampers with property of another with intent to cause injury, inconvenience or annoyance to that person or to another, or if he knowingly makes an unauthorized connection with property of a utility.”

Criminal tampering is a class 2 misdemeanor carrying up to 120 days in jail and/or up to $750 in fines. But the “domestic violence enhancer” on Jeudy’s charge is key, as it would increase the potential punishment if convicted.

Jeudy was taken into custody between 11:30 a.m. and 12:30 p.m. and was arrested on probable cause since no arrest-warrant affidavit has been presented by the sheriff’s office.

The Broncos released a statement on Thursday afternoon, saying “we are aware of the matter involving Jerry Jeudy and are in the process of gathering more information.”

The 23-year-old Jeudy was the team’s first-round pick in 2020 and has 90 receptions for 1,323 yards and three touchdowns in 26 games. He’s expected to be a huge part of the team’s offensive plans now that they have quarterback Russell Wilson, though we’ll have to see how this situation plays out and affects his upcoming season.