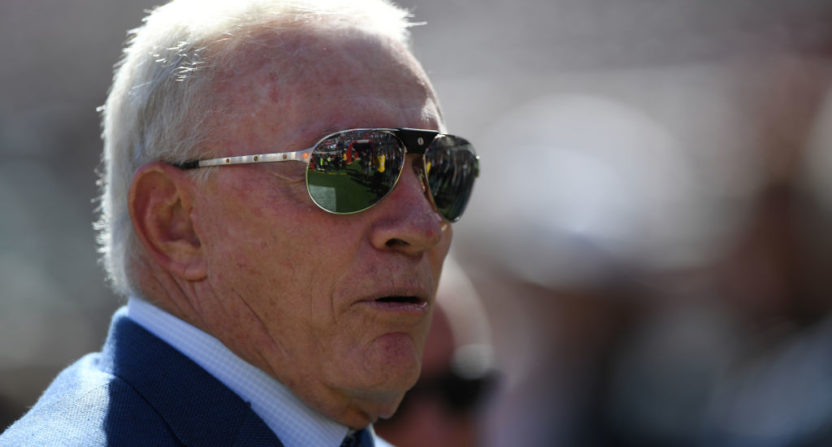 Dallas Cowboys owner Jerry Jones is under fire from an unusual source; not NFL commissioner Roger Goodell or other NFL owners, whose fight with Jones is heating up, as detailed in an ESPN The Magazine piece by Don Van Natta Jr. and Seth Wickersham, and not those who have criticized Jones for other matters, from his reaction to player protests during the national anthem to his potential involvement with Papa John’s NFL-bashing, but from those reacting to a 2013 video showing Jones making a racially-insensitive (and insensitive in other ways) remark. Here’s the video, which The Blast posted Friday:

The video was shot in 2013 at the Warwick Melrose Hotel in Dallas, Texas. Jones is walking near the bar and appears to be heading out of the hotel.

In the video, he’s asked to deliver a special message for the recent engagement or wedding of a couple who seem to be Cowboys fans.

Jones looks directly into the camera and says, “Jennifer, congratulations on the wedding. Now, you know he’s with a black girl tonight, don’t you?” He then busts up laughing.

We’re told the fan in question is white.

Even though the video was shot four years ago, we’re told the fan recently shared it with his group of friends because he thought the current temperature of race in the NFL and the country made Jones’ comments relevant. The friends were shocked after seeing the footage.

It was sent to The Blast because the individuals involved thought it was important for NFL fans to see. The source we spoke with said, “F**k Jerry Jones.”

Jones has since apologized, as per David Moore of The Dallas Morning News:

“That comment was inappropriate,” Jones said in a statement issued by the club Friday afternoon. “It’s not who I am, and I’m sorry.”

And former Cowboy Deion Sanders defended Jones to the News:

“I refuse to allow a moment to turn into a monument regarding a man I have known for 20 years, not just as an owner, but as a friend,” Sanders said in an emailed response. “I won’t cast judgment, on one moment when a joke went south, to capture who this man represents in a lifetime commitment of love and compassion to all ethnicities.

“A joke that was intended to add humor at the request of a fan in a lighthearted moment was taken totally out of intent,” Sanders continued. “I’m sorry we’re in this state of mind as a country, but if you’re looking for a racist, Jerry Jones is not that guy.”

Despite that, this isn’t something that makes Jones look good. And sure, while one attempted joke like this isn’t necessarily reflective of Jones overall, critics will undoubtedly add it to the pile of concerns raised about him recently. And the timing is interesting there given Jones’ escalating war with other owners and Goodell. Maybe this fan and/or his friends didn’t have that in mind when they publicized this video, or maybe they did. But it certainly doesn’t seem helpful to Jones’ side of that fight.