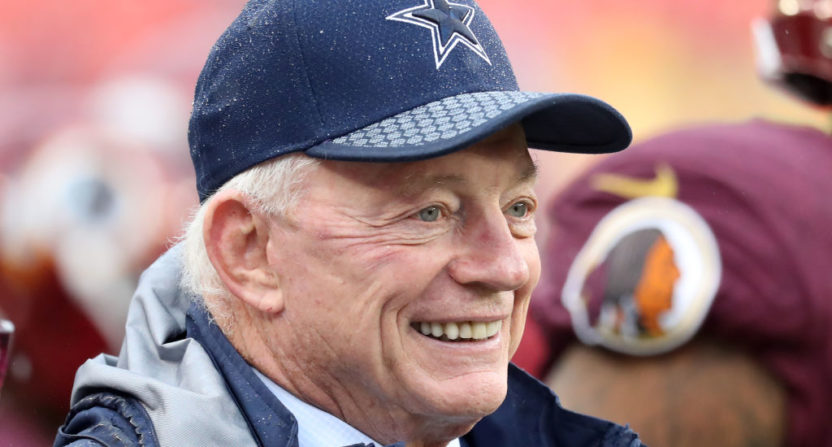 Typically, owners don’t have a lot to fight about amongst themselves. Everyone makes a ridiculous amount of money, and generally success for one franchise is good for the league as a whole. No one needs to rock the boat.

Jerry Jones, though, is a man built to capsize any canoe he’s in, and his current hatred for how NFL commissioner Roger Goodell has handled the Ezekiel Elliott suspension has spilled over into an all-out effort to block Goodell’s contract extension even hiring Harvey Weinstein’s lawyer to pursue all potential legal avenues. Meanwhile, Falcons owner Arthur Blank isn’t backing down from his efforts to approve Goodell’s extension.

That’s causing plenty of acrimony, according to ESPN’s Chris Mortenson:

Jerry Jones has accused the league and compensation committee chairman Arthur Blank of misleading ownership on negotiations with Roger Goodell on contract extension, according to letters obtained by ESPN. League has replied, accusing Jones of misleading other owners. More to come

In the past 24 hours, Jones and the league have accused each other of misleading allegations, and now Jones is on the brink of filing a lawsuit if Goodell’s contract extension is completed without final approval from the league’s 32 teams.

On Saturday night, Jones was terminated as a non-voting ad-hoc member of the league’s compensation committee by committee chairman Arthur Blank, owner of the Atlanta Falcons. Blank cited Jones’ expressed intent to sue the league and members of the committee during a committee meeting Nov. 2, as a reason for his action.

Is this conflict heavy on committee meetings minutiae and deep contract examinations? You bet it is. Essentially, Goodell’s extension is being handled by the six-owner compensation committee, of which Jones is not a member. He had been a non-voting presence, until Blank booted him this weekend. Goodell himself appointed Blank the head of the committee, which does raise some fun questions, although it’s not like anyone thought the NFL wasn’t chock full of cronyism.

Here’s the letter Jones had written:

The letter, which was copied to all NFL owners, alleges that Blank told owners, including Jones, on numerous occasions, that the six-man committee’s recommendation would be unanimous. Two ownership sources, however, said the committee is not currently unanimous on Goodell’s contract, which is in its final stages. Jones’ letter alleges Blank backed off his word there would be “unanimity” on the committee before the extension would be finalized.

And now, according to Mortensen, nearly half the league is split on the proceedings:

Two sources believe there are “about 15 owners” who want to review the details of any final proposal to Goodell before it is completed.

Jones’ counsel, in his letter, wrote the primary goal of the Cowboys’ owner is not to seek litigation, but full transparency from Blank on terms that have been “harbored” from owners. He wrote it is “necessary” changes to the proposal be implemented. Absent those changes, Jones’ words imply he will take legal action.

“Accordingly, Jerry Jones will continue to exercise his right to protect himself and the other Owners from the Committee Chairman’s undertaking of a substantial financial commitment on behalf of the NFL without the Owner’s vote,” Cohen wrote.

In other words, this issue isn’t going away any time soon. And it’s tough to pick a side; Jones is generally awful, but Roger Goodell is also generally awful! It’s just nice to have them fighting each other for a while.