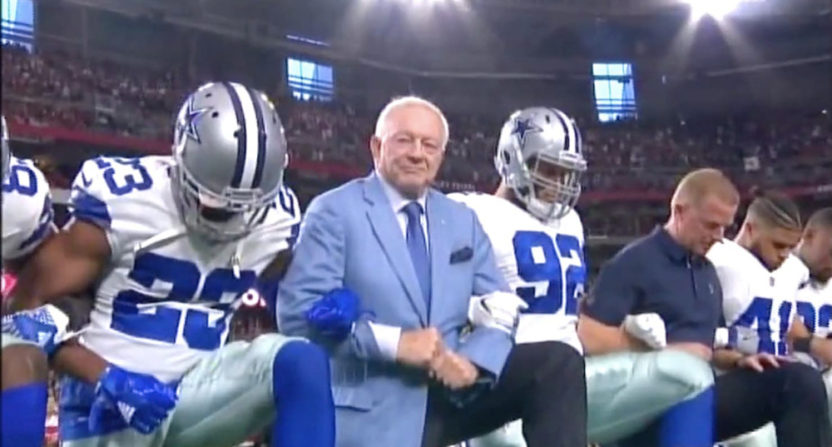 Dallas Cowboys owner Jerry Jones has been at the forefront of much of the NFL protest talk, thanks to him joining his team to take a knee ahead of the national anthem two weeks ago and to all the reported calls he’s received from President Donald Trump on the issue. And now, Jones has said that if his players opt not to stand during the national anthem, they will not play. Here’s more on that from ESPN’s Todd Archer:

According to the Dallas Morning News, defensive ends Damontre Moore and David Irving raised their fists at the end of the anthem before Sunday’s game against the Packers. Jones was unaware of their actions when asked after the game.

Those comments from Jones aren’t necessarily going to be received well by those who support the protesters, who have made it clear that their issue isn’t with the flag, the anthem or the military, but with ongoing issues of racial inequality. However, they fit with what Jones said earlier last month about how happy he was that Cowboys’ players weren’t protesting at that particular point in time:

“I got to give a big pat on the back to our entire team, our coaching staff, our entire organization,” Jones said in a radio appearance on 105.3 The Fan in Dallas on Tuesday. “We strongly, strongly support the flag in every way we support — and it’s almost ridiculous to be saying it — the people who for generations and generations have given it all up so that we can get out here and show off in front of millions of people on television.”

“The forum of the NFL and the forum on television is a very significant thing. I’m for it being used in every way we can to support the great, great contributors in our society, and that’s people that have supported America, the flag, and there’s no reason not to go all out right there. And for anybody to use parts of that visibility to do otherwise is really disappointing.”

So this is consistent with what Jones has previously said. But it’s not going to go over well with many critics, especially if he tries to enforce this threat. Benching players for anthem protests would be a bold new step, and one far different than what we’ve seen so far. Yes, original protester Colin Kaepernick has been effectively blackballed from the league for his role in starting these protests, but that’s as a free agent, and teams can throw out all sorts of spurious reasons for not signing him. Delivering actual consequences to under-contract players would be a big jump for Jones, or any other NFL owner. We’ll see if that happens.