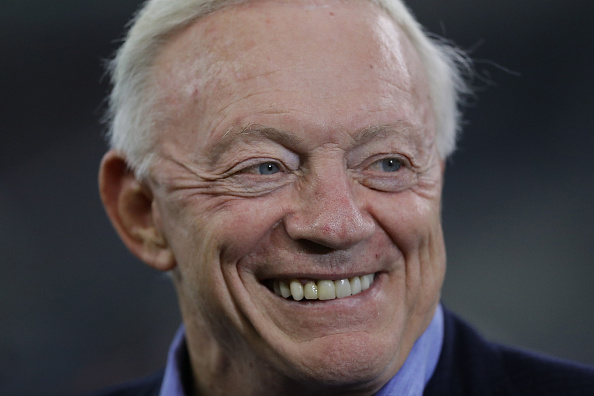 Well here’s a shocker for you today. A rich old white guy says he is not happy to see football players protesting the national anthem by taking a knee before NFL games. The old white guy in this particular situation happens to be Dallas Cowboys owner Jerry Jones.

For a quick refresher, in case you actually need one at this point, San Francisco 49ers quarterback Colin Kaepernick has started a growing protest movement involving taking a knee during the national anthem to draw attention to social injustices African-Americans experience in our nation. Other NFL players have followed in the movement and that was under the microscope as the NFL kicked off its first Sunday of the season on Sunday, September 11. One team with no such protests were the Dallas Cowboys.

“I got to give a big pat on the back to our entire team, our coaching staff, our entire organization,” Jones said in a radio appearance on 105.3 The Fan in Dallas on Tuesday. “We strongly, strongly support the flag in every way we support — and it’s almost ridiculous to be saying it — the people who for generations and generations have given it all up so that we can get out here and show off in front of millions of people on television.”

Jones seemed to suggest, as so many others have, that if Kaepernick and others have concerns about what’s going on in our society, then he should find other ways to demonstrate their motives outside the NFL’s playing field and business model.

“The forum of the NFL and the forum on television is a very significant thing. I’m for it being used in every way we can to support the great, great contributors in our society, and that’s people that have supported America, the flag, and there’s no reason not to go all out right there. And for anybody to use parts of that visibility to do otherwise is really disappointing.”

But you see, if Kaepernick was protesting for his beliefs in a less visible way, far fewer people would even be talking about the focus of the protest. It may be fair to suggest employees of an organization, as NFL players are of the NFL, that displaying personal emotion is frowned upon. This is a league, after all, where wearing the wrong cleats or eye black can see you receive a fine, so the precedent is there for the NFL. This is just one area where the NFL is justifiably staying out of the political mess that would transpire if they decided to step in and force players to stand during the national anthem.

It still seems more people are more concerned about the national anthem and how people act during it instead of shifting the focus to the point of the protest in the first place. Maybe we’ll get there soon, once people stop trying to force others to act a certain way during the national anthem first.